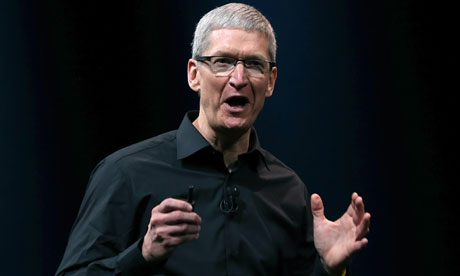 Apple gets its fair share of criticism these days, but one thing it can’t be accused of is an inability to generate a buzz, seemingly without even trying.

With that in mind, there’s no doubt that the world will be watching as CEO Tim Cook unveils the iPhone 6 at a media event, according to Recode.net, on September 9.

While Apple’s notoriously secretive approach to just about everything may just barely still be considered an endearing part of its appeal, Cook will know the company’s strong association with innovation could hang on the reaction to this launch.

Despite undoubtedly maintaining a brand enviable to every business in the world, an emerging wind of change from the Far East has began to threaten Apple’s dominance in a mobile market it famously revolutionised.

Many have questioned the advances in innovation that Apple’s recent iPhone models have made, so the pressure is on Cook and co to deliver.

As ever, the rumour mill has been in overdrive in the lead up to the launch, but Information Age has brought together the most likely things you should expect to see on September 9.

Apple is a stickler for tradition, and if that continues the new iPhone will be available to the public ten days after the launch, on September 19. Stand by for the usual pictures of eager beavers queuing round the block on release day.

The evolution of the mobile phone has been fascinating to observe. Starting as a brick, it gradually got smaller and smaller, but recent years has seen manufacturers go big again, namely Samsung, Sony and HTC. While Apple has stayed well under the 5-inch mark, that is all set to change.

The wide-spread belief is that Apple has worked on two versions of the iPhone 6: a 4.7-inch model, which is similar in size to the last iPhone, and a 5.5-inch model closer in size to the Samsung Galaxy S5 and HTC One M8.

More interestingly, analysts predict that one of those devices will be an ‘iPhone Air’, which, in similar fashion to the iPad Air and MacBook Air, is lighter and thinner.

Both devices are expected to have a slimmer frame and rounded edges, which have been predicted in previous models but never came to fruition. Like the iPhone 5s, the new devices are likely to come in silver, gold and space grey.

One of the more publicised rumours, born from various supposed picture leaks, is the inclusion of a protruding camera that will pop out of the back.

A patent filed in 2012 shows insight into a bayonet mount system for an iPhone camera, which is currently seen in SLR cameras to allow interchangeable lenses using a twist and lock motion that is also utilised in light bulbs throughout the UK.

The bayonet attachment is Apple’s antidote to the bulky screw-mount systems seen in other phones that wish to boast camera features like wide angle and optical zoom capability.

The protruding camera is not the only rumour to emerge from the wave of ‘product leaks’ – pictures have also displayed recessed volume controls. This feature will contribute to a smoother design on the edges, as well as decreasing the irritating tendency to accidentally change the volume.

An unexpected but likely addition to the iPhone 6 will be the use of alloy Liquidmetal to embed Apple’s logo on the phone.

This material, which is stronger than titanium, will essentially make Apple’s logo almost entirely scratchproof.

The addition of a fingerprint sensor to the iPhone 5s was initially dismissed as another hype-fuelled, yet pointless, feature. However, the touch ID has excelled to ultimately replace the tedious ritual of entering a security code, and has scored major points in business environments.

Rather than sticking with the tried-and-tested, it seems Apple will introduce a new and more durable sensor to the iPhone 6. Another patent application revealed the details of the technology, which will be faster and even more secure than the previous version.

Apple has been distinctly slow off the mark in the world of NFC (near field communication), the technology that enables contactless payments and data exchange. However, with the iPhone 6, that is reportedly set to change.

Semiconductor manufacturer NXP, which supplied the motion-sensing chip for the iPhone 5s, signed a major licensing agreement relating to its emerging ID business last year with a company that many believe to be Apple.

The new NFC chip in the iPhone 6 will bring a whole new security layer to the world of NFC, which has been adopted on several Android phones. According to reports, NXP’s chip will be able to encrypt, decrypt and sign data packets coming to the device.

8. Apple's next generation A8 processor

For a long time now, Apple has stuck with a dual-core processor in its devices, while Android phones have boasted quad-core chips offering speedier performance.

As previously stated, Apple is a traditionalist at heart – so the dual-core is unlikely to budge from the new A8 processor in the iPhone 6. However, it will reportedly feature 2GHz, a massive boost on the A7’s 1.3GHz.

This could have a big impact on the speed of the iPhone 6, especially considering previous models have hardly struggled in the processing stakes.

One of the biggest rumours surrounding the iPhone 6 has been the inclusion of the super-strong sapphire crystal for the phone’s screen. For those who have faced the expensive process of fixing a cracked screen – and there are a lot – sapphire crystal is music to the ears.

However, this inclusion is looking very unlikely since market research team TrendForce LEDInside claimed that a look into Apple’s supply chain showed it would be impossible to make enough of the displays before the product’s release date.

One thing that is for certain is that sapphire glass will be used across future Apple devices after the company commissioned GT Advanced Technologies to build a manufacturing plant in Arizona.

With the mass hype surrounding the iPhone 6, it’s easy to forget that Apple will also release its new mobile operating system, iOS 8, on the same day.

Unlike the phones, this will be immediately available for download for existing iPhone users, which, as usual, will serve as greater anticipation for the release of the iPhone 6.

The most significant features of iOS are set to revolve around Apple’s continued embrace of the Internet of Things, a phenomenon in which objects, or people, are equipped with internet-connected sensors that generate actionable data. This will be most present in the form of a new health and fitness application that will bring together existing apps around things like heart rate and blood pressure.