Skip to content
Home » Topics » Software and Applications » From 5% to 50% of sales in 3 years: How Infor got cloud right 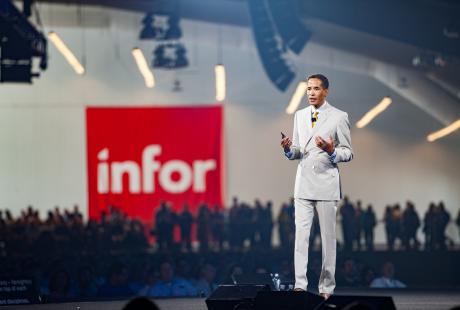 In 1985, Nintendo released the Nintendo Entertainment System (NES), which quickly became the best-selling gaming console of its time and led to a period of dominance in the gaming industry for the Japanese company in the 80s and 90s.

Technology halts for no one, however, and 30 years on Nintendo had lost its mojo. Overtaken by more innovative gaming plays by the likes of Sony and Microsoft, Nintendo represented a tired brand and was suffering from a flailing market capitalisation.

On 6 July, Nintendo released Pokémon GO, a location-based, augmented reality mobile game. Pokémon is a franchise first released as a video game on Nintendo’s Game Boy in 1996. The technology behind Pokémon GO has been around for years, and the idea was extremely simple.

>See also: The view from the cloud: how Infor CEO Charles Phillips is setting out to build the ‘social network of companies’

Five days later, Pokémon GO was the most active mobile game ever and Nintendo’s market value had increased by $9 billion, by which point the app had only been released in Australia, New Zealand and the US.

In New York City, use of the app reached a state of hysteria, with people running around the streets actively searching for Pokémon. That same day, enterprise software company Infor opened its customer show, Inforum, at NYC’s Javits Center.

To compare Nintendo’s resurgence with that of Infor too much would be foolish, but there is clear parallel in two not-too-desirable brands transforming their fortunes with simple ideas.

So what was Infor’s Pokémon GO moment? The hiring of former Oracle president Charles Phillips in 2010. Phillips, it seems, is quite good at capturing the moment.

Within months of being hired, he led the $2 billion acquisition of software company Lawson, essentially doubling Infor’s size overnight and positioning it as the third-largest ERP vendor after SAP and Oracle.

The acquisitions followed at a steady pace, albeit fewer major Lawson-esque targets and more niche companies that strategically allowed Infor to differentiate itself with industry-specific solutions that require little or no customisation.

And as a self-confessed ‘product guy’, Phillips enforced a greater emphasis on innovation, subsequently spending more than $1 billion on R&D.

The icing on this shiny new Infor cake came in the summer of 2012 when the company relocated to New York City, a place that encapsulates its new image: cool, slick and serious about business.

To coincide, Phillips took the bold and unusual move to create an in-house design agency called Hook & Look. He had two clear goals that he repeated to anybody who would listen: ‘cut the bloat out of enterprise software’ and ‘no more fugly software’.

Infor created a talent workforce that mixed software engineers with fashion designers, digital effects specialists and film-makers, and let them loose on the company’s disparate platforms and frameworks to unify its user experience. Originally an unpopular segment of the company – Phillips made product teams get sign-off from Hook & Loop before taking anything to market – it is now considered the jewel in Infor’s crown.

When Information Age last attended Infor’s customer show in 2014, Infor was ready to share its story. It shouted about its three-pillared strategy: its micro-vertical capabilities (Infor created industry-specific application suites so customers don’t have to modify); an open-source and cloud-based approach to applications (it took the decision to partner with AWS on its cloud solutions rather than build its own infrastructure); and designing those applications around ‘beautiful’ user experiences (with Hook & Loop).

It soon added a fourth pillar to its strategy – science – with the creation of an in-house analytics department (Infor Dynamic Science Labs) working across its product lines.

Of the four, cloud is the most significant to Infor’s growth. Three years ago, just 5% of Infor’s sales were from cloud products; in its last financial year that was up to 50%. Infor is AWS’s largest partner after Netflix in a partnership where AWS hosts data from Infor’s customers in 12 regions around the world.

Infor now has more than 7,000 unique cloud customers, with 62 million users subscribing to its cloud from
103 countries.

To top it off, it has overtaken SAS Institute as the largest privately owned software company in the world. And it recently closed its largest
ever deal – a cloud transformation with FTSE 100 building materials distributor and home improvement retailer Travis Perkins.

‘Through working in partnership with Infor, we will embark on implementing the biggest systems change in the history of Travis Perkins Group,’ said the British company’s CEO, John Carter, who seemed to like Infor enough to fly out and speak at Inforum just two weeks after Britain voted to exit the EU.

But like any good leader, Phillips is not resting on the success he has driven over the past six years. At Inforum, the company launched a digital consultancy arm of its business that will offer ‘digital-as-a-service’.

>See also: The rebirth of Infor: a transformation led by tech’s coolest character

H&L Digital is a client-facing extension of Hook & Loop, using many of the same approaches, including digital workshops and hackathons, to deliver differentiated experiences for Infor customers’ own customers.

‘Many consulting firms and design agencies claim to help deliver digital transformation to help clients meet the challenges of digital disruption, but because they lack the underpinning technology to effect real change, their customers’ projects often languish, stall or fail to meet expectations,’ said Phillips.

‘With the creation of H&L Digital, Infor can deliver all the components of an end-to-end solution as a service: cloud-based industry applications, dynamic data-driven insights, cutting-edge user experience design and a connected supply chain network.’