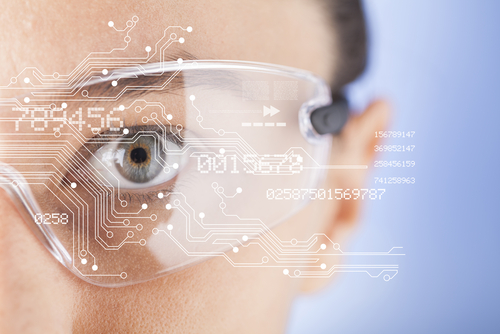 Many wearable devices to date have failed to live up to expectations – Google Glass and the Apple Watch in particular left many consumers wanting more.

The near future will bring new applications for wearables that will likely revive demand for the technology. However, it is the business marketplace that will see most of the innovation and growth, particularly around augmented reality smart glasses, where the technology will be used to streamline processes and add value to operations.

Here are five augmented reality predictions for the near future.

1. The smart glass revival has work to do

Reports suggest that we can expect a number of comebacks in the wearables market. Google is likely to try build on the valuable lessons learnt from its first venture into the smart glasses market with Google Glass.

Given its apparent success with its ‘Glass at Work’ programme, the company should consider carefully the target audience of its next wearables project in order to satisfy expectant tech fans.

Microsoft HoloLens, smart glasses that deliver augmented reality via holograms, is a great proposition, but it is likely that its shortfalls – battery life and weight – will be addressed in 2016 with a comeback that will see it produced and adopted on a larger scale.

Competition will be high, and wearable technology vendors will be determined to create products that provide a unique set of capabilities that offer distinct benefits to the end user.  It will be interesting to see whether concept will deliver on expectations.”

2. Wearables at work – from professional to industrial

The real near-term opportunity for wearables – away from the fitness trackers and health gadgets already saturating the consumer market – lies with businesses.

Next year, an increasing number of businesses – for example, in the professional services and industrial sectors – will look to wearable technologies to enhance efficiency and streamline processes.

A wide variety of sectors – from health and logistics, to arts and entertainment and manufacturing – are already harnessing the power of augmented reality glasses to provide a more interactive customer service, train staff and improve patients’ quality of treatment and care.

As more applications for wearables are unearthed, expect to see more businesses showcase exciting uses of wearables in industry next year. This is where the technology can have real, life-changing impact.

To date, most of the augmented reality smart glasses brought to market have been created to deliver a wide number of applications for the user, with a non-specific purpose. Google Glass, for example, is an open Android product designed to deliver a number of third-party applications, such as Evernote, Facebook and Twitter, based on the user’s personal preferences.

So far, hardware manufacturers have dictated how wearables will develop, but going forward, independent software developers (ISVs) will likely take the lead in determining the future of augmented reality wearables.

It’s no happy coincidence that the power to define the future of wearable technology has shifted into the hands of ISVs. Their close relationship with businesses, and deep understanding of what companies want the technology to enable their workers to achieve, gives ISVs a unique insight into what the next phase of wearables should be.

Specific use cases and applications will demonstrate the potential for smart glasses and also highlight areas for improvement. ISVs, businesses, and manufacturers of wearables will work together to develop new applications for the workplace.

The collaboration between these constituents, based on the requirements and the experience of the end user, will inform the future development of wearable technology.

4. Wearables will not replace other devices, but will become a new tool in the digital arsenal

In the same way that the tablet did not replace the smartphone, wearables will become a complementary technology for both consumer and business users. Tablets, smartphones, desktop PCs and smart watches all have their place and are used at different times of the day, for different purposes.

As the adoption of wearables like smart glasses gains pace, we’ll see users carving out specific use cases and needs for this technology, using it in tandem with existing technologies to extend the multichannel, multi screening trend that epitomises the digital world today.

5. IoT and smart glasses come together to streamline business processes

The Internet of Things (IoT) will enable machines to talk to one another and work smarter. It will also help to drive greater and more thoughtful interactions between humans and machines.

When the intelligence generated by IoT systems and networks is integrated with wearables that support augmented reality, that same technology has the potential to create a workforce of ‘smart humans’. It will enable them to solve problems, simplify jobs and use real-time information on the go.

>See also: Not all wearables are created equal: how to design a wearable security strategy for the new ecosystem

The IoT will come into its own, being adopted by a huge number of industries – such as manufacturing and healthcare – and augmented reality wearables like smart glasses are poised to be at the centre of this industry development.

Introducing a human element into a system of machines is logistically tricky. However, smart glasses allow humans to ‘plug in’ to an IoT network, hands-free.

The nature of augmented reality also means they are still able to interact with the world around them but with an added digital layer to make them ‘smarter’.