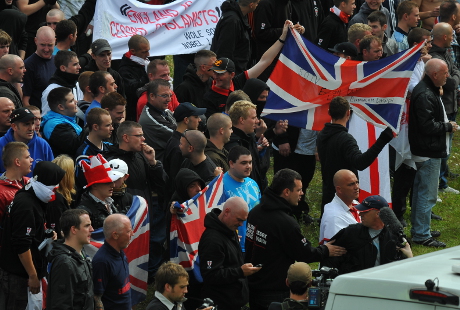 Hacktivist collective Anonymous has published a "mass data leak" containing details of what it says are members of the far right group English Defence League (EDL).

The group posted a list of names, addresses, phone numbers and criminal convictions of what it claims are 200 senior EDL members to the text hosting website Pastebin. The list also contains addresses of what are said to be EDL donors.

The leak comes after more than 1,000 EDL members and anti-fascist groups clashed at a rally outside Downing Street on Sunday, where EDL leaders chanted ‘Muslim leaders off our streets’. The EDL have mobilised to hold several rallies after the death of Drummer Lee Rigby in Woolwich, blaming Islam for the attack.

In a statement on YouTube on Tuesday, Anonymous announced that it will begin a “systematic and comprehensive” campaign to destroy what it called  the EDL’s “cult”.

"We will not allow your injustices, your lies, and your stupidity, to further radicalise our youth into fearing and despising their fellow man,” said the audio statement. “Under the guise of national pride you have instigated crimes against the innocent and incited the subjugation of Muslims.”

“You will fall. We can say this with complete confidence. We are everywhere, you cannot hide, you cannot win.”

The EDL have a history of being targeted by hackers. In 2011, a group calling itself ZHC brought down its 10,000 strong Facebook page. Hundreds of names and addresses originally leaked in 2010 by a group called Mujahideen Hacking Unit were also recirculated via Twitter accounts on Tuesday.

"The EDL are currently in panic and are closing their Facebook groups down overnight in an attempt to protect their social networks,” Gary Fieness Hastings, editor of anti-fascist website EDL News, told Information Age.

“They are only too aware of the damage hacking groups can do after ZHC Hacking Company took their main Facebook page away from them in 2011 which marked the decline in support for the group until their recent reinsurgance off the back of the murder of drummer Lee Rigby."