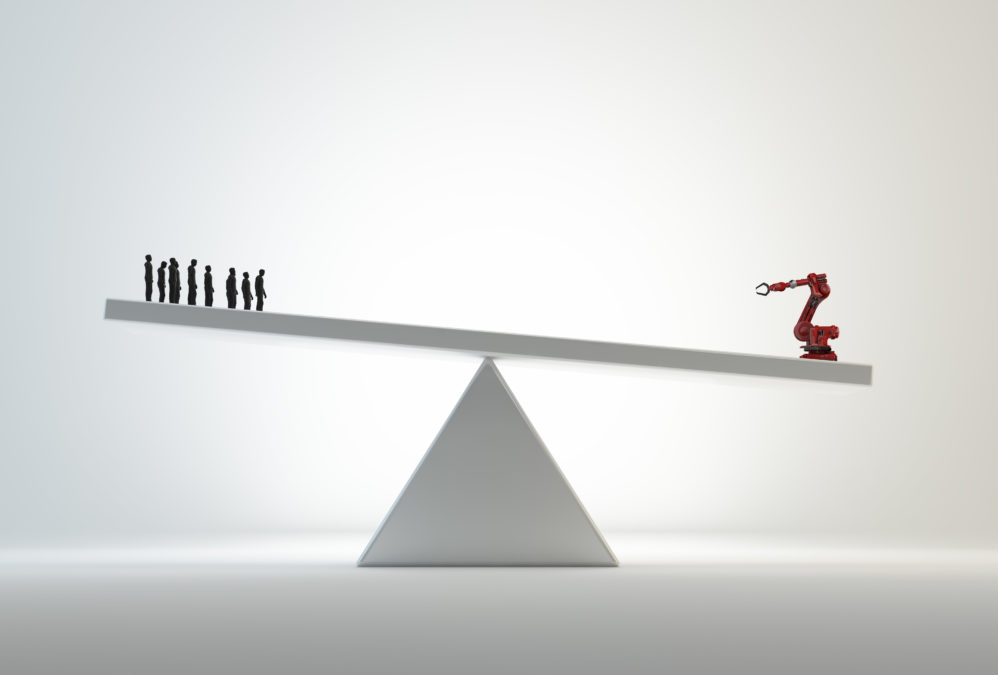 Really, any discussion of AI depends entirely upon how you define “intelligent”.

As far back as we can look, computers have always made decisions. They were first used in warehouses to regulate stock levels – if stock dropped below the value of 10, the computer would make the decision to purchase more. If we unpack that, the computer was making the decision, but you, a human being, were behind it. You were programming what decision to make, as well as how to make it. While this was fine for simple activity like monitoring stock, this process was made easy because that’s all the computer was capable of understanding.

Maybe the real problem here for you, the warehouse manager, was “I don’t want to run out of stock”. But computers weren’t clever enough to understand that. Instead, you had to work out that it takes two weeks to deliver stock and you are selling five a week on average…therefore, you need to re-order when stock drops below ten. You were doing the maths and then feeding the computer demands which it didn’t need to apply any thought to execute.

The perils of artificial responsibility: Developing and applying AI

Fast forward 30 years, and Moore’s Law has provided sufficient power for a new wave of algorithms: machine learning and artificial intelligence. The computer is still a tool, but the key with true AI is that, while you still tell the computer what you want to achieve, you no longer have to tell it how to achieve your goal. Instead, you teach the computer what you want, but let it understand the problem and decide the best way to solve it. And with that, the arms race becomes about how intelligent you can make your system. How able is your computer to understand and differentiate all the things it’s being taught?

This might make your stock reordering algorithm slightly more optimal, as it accounts for different lead times from different suppliers during different seasons. But more importantly, it allows you to tackle a new class of problem. Things that humans can’t always explicitly define in terms of numbers and equations, but they know the answer when they see it. Try to prescribe to a self-driving car when to steer left 0.3 degrees and when 0.4 degrees and you’ll have a problem, but teach it to slam the brakes on when someone steps into the road and you’ll be on to a winner.

In this way, AI shouldn’t be seen as a threat today, but as an opportunity – to automate a new class of problems and free humans up to spend more time focusing on the interesting problems and decisions that only we are capable of.

ALM Intelligence has today released an artificial intelligence report about how law firms need AI to stay in the game and overcome current and future challenges, while improving efficiencies. Read here

Let’s take the legal sector as an example. What we’re now seeing is the emergence of AI-powered technology which is reading and understanding contracts and documents in the same way a human can. Machine learning algorithms are giving the technology the ability to learn and teach itself from the data it is shown, without needing explicit programming. The technology is only as good as the human operating it, but it is fair to suggest that the human is no longer as good at their job without the technology.

>Read more on Artificial intelligence in the legal industry: Adoption and strategy – Part 1

>Read more on Artificial intelligence in the legal industry: The future – Part 3

AI is offering lawyers more insight, control and speed in their day-to-day legal work than they’ve ever been able to achieve, by pointing out anomalies and patterns in huge volumes of data which humans alone simply cannot feasibly get through, let alone with a sharp eye.

Meanwhile in the cyber sphere, AI is now capable of autonomously detecting and fighting back against in-progress cyber attacks. In the very same way to the human immune system, cyber technology is now able to learn what is ‘normal’ within an organisation’s network, and identify and neutralise outliers that do not fit these patterns of normality.

I’ve zeroed in here on the legal and cyber security industries as examples, but the benefits of AI are completely transferrable. They can be applied across the board. What AI is really doing is giving humans the ability to surmount very large and very complicated challenges across a whole range of industries. The quicker we as a society are to overcome our innate resistance to change, the better off we’ll be for it.