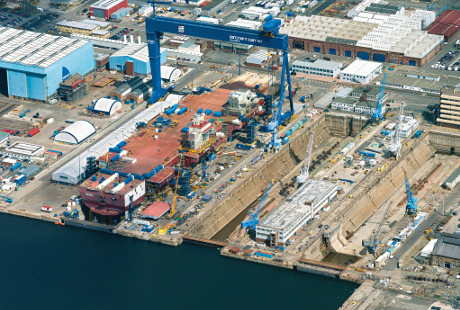 Babcock Marine is the UK’s large naval services company, providing maintenance and support to the Royal Navy’s fleet of submarines, warships and other naval infrastructure.

The company is a member of the Aircraft Carrier Alliance, alongside BAE Systems, Thales and the Ministry of Defence. The Alliance is currently building two enormous aircraft carriers – HMS Queen Elizabeth and HMS Prince of Wales.

The largest warships the UK has ever commissioned, they are being built like a giant Lego model, with individual blocks being built at six shipyards around the UK, before they are transported to Babcock’s Rosyth facility for final assembly and integration.

With complex projects like these underway at all times, there is never a good time for major ERP consolidation programme. However, like most companies that have grown through acquisition, Babcock Marine had ended up with a variety of different ERP instances scattered around the organisation.

It had five versions of Swedish vendor IFS’s core ERP platform, with a combined user base of 7,000 users across 26 sites, and three more instances from other suppliers.

Tim Welburn, Babcock Marine’s IT director, saw a clear need for consolidation. “We had got to the stage where we were considering how we could tie together our [ERP] components in to a platform we could use to grow the business,” he says.

The aim was to eliminate waste and improve the information supply chain. “For us, consolidation means we have the chance to drive up data quality, reduce duplication and cut our support costs,” Welburn says.

Welburn therefore initiated a programme called Marine One. The initial focus of the programme was to standardise on a single instance of the IFS ERP platform across its multiple sites. “It’s about developing a single platform across our UK site, Canada and potentially Australia,” he says.

Deploying a single instance of IFS has given Babcock Marine greater visibility of operations across its various sites. Given that it has to build huge vessels like HMS Queen Elizabeth in bits, spread across the country, this cross-unit view has clear benefits.

The second phase of Marine One will see Babcock Marine update its IFS implementation to the most current version of the company ERP platform.

The Marine One programme has run alongside a wider 18-month IT standardisation effort in the company, which was completed last year. That project saw Babcock Marine roll out all-new desktop PCs running Windows 7 across the company, upgrading its data centre kit and refreshing its wireless and local area networks.

One of the aims of all this standardisation is to ease the process of onboarding newly acquired companies. Babcock Marine has enjoyed double-digit growth in the last few years, driven at least in part by a series of acquisitions. Integrating new acquisitions into Babcock Marine’s IT environment quickly and economically is a therefore a key benefit.

It will also extend some powerful functionality to corners of the business that have yet to benefit from it, Welburn says. “Having a common platform also gives us the power to implement enterprise-grade IT in units where it would previously not been economical.”