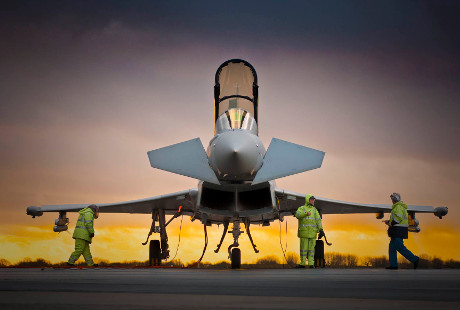 Over the last 15 years, defence contractor BAE Systems has moved a number of major programmes – including its work on the Tornado and Typhoon fighter jets and its Defence Information & Training unit – under a single umbrella division, called Military Air and Information.

As is often the case with this kind of organisational development, the move left the new unit with a portfolio of business applications, including no fewer than seven ERP systems.

"Having seven ERP applications is, without doubt, not the best place to be," says BAE Systems' John Booth. "A further challenge is that each one of them had been customised."

The unit had also ended up with a whole ecosystem of supplementary applications, such as project management and e-procurement tools that hung off each ERP platform.

Booth is in charge of the project to migrate all of the MAI's core operating processes onto a single, unified ERP platform.

The business case for the project is twofold: firstly, standardising on a single platform will help reduce costs. Secondly, moving to a modern ERP application will cut out some antiquated business practices.

The MAI division has selected Infor LN, the ERP suite formerly known as Baan, as its preferred platform. This was because the many of the existing operating processes were already based on Baan, and switching to another supplier would have meant radically changing its core processes.

This time, MAI is set against customisation of the Infor LN application. "That is our mantra: we are taking Infor LN vanilla."

That said, as a significant customer for Infor, BAE Systems can exert some influence on the LN product roadmap, Booth says.

The implementation means moving around 4,000 users onto the new application, and in many cases, throwing out the customisations they are used to using.

Some of them have taken some convincing, says Booth.

"On any change programme, your first immediate reaction is resistance, so I've had to do a lot of selling," he says. "One of the biggest challenges is to persuade people of the benefits of taking away the customisations that they think make life simpler."

Thankfully, he says, the project has the support of the departmental directors. "The biggest single benefit for this project is the fact that the directors clearly understand the inefficiencies associated with the current arrangements of applications and processes.

"That makes life a lot easier, because change is led from the front."

There is a team 100 people working on the project, many of whom are drawn from the business units. “They bring two things:  their own knowledge, and a contact map, so they can reach into the organisation to find specialist knowledge when we need it.”

MAI is now preparing to commence a staggered rollout of the new system across the organisation, starting with the manufacturing units, followed by the supply chain teams.

It is an ambitious project but Booth is confident he has the change management processes in place to make it work. “I’ve worked on a number of programmes, but to get 4,000 people marching in the same direction, will be amazing.”