Biffa cuts the waste from communications 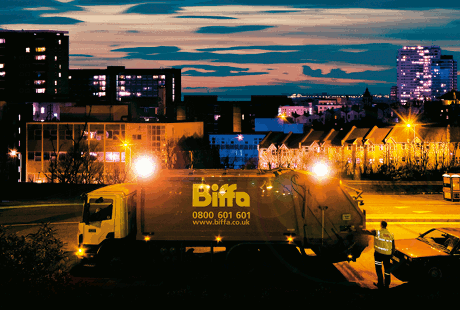 Biffa is the UK’s second-largest waste management provider. The privately owned company turns over £860 million a year and employs more than 6,000 people.

Like most businesses, Biffa’s telecommunications infrastructure is a heterogeneous affair, reflecting past technology strategies and company acquisitions over the years.

Now, though, the company has decided to unify its communications infrastructure onto a single platform from a single provider, Azzurri.

As IT director David Gooding explains below, not only will the contract deliver an expected £2 million saving over three years, it will also support a number of new initiatives including mobile working, video-conferencing and Biffa’s upcoming data centre outsourcing move.

Information Age: What were the objectives of your communications refresh?

David Gooding: The main driver was to save money without compromising the user experience.

Back in 2008, we had a mainly BT estate, with lots of leased lines, ISDNs and PSDNs. We brought in Azzurri to help us save some money. We took out all the ISDNs, put in IP telephony and it worked very well.

But there are some things that still need rationalising, and we've made some changes to the business since then as well.

For example, since 2008 we've transformed customer support so that, instead of calling one of our 70 depots, customers now call into a central contact centre.

Our main IP telephony solution was based on Cisco kit, but it wasn't the right price for our call centre so we had adopted Avaya equipment. But that means we had two platforms that weren’t integrated. We wanted to completely integrate those two platforms and to take some cost out of the Cisco kit.

Also, in 2010 we acquired a recycling business called Greenstar. Traditionally, Biffa collected waste and transported it to landfill, but over the past couple of years we've transformed into becoming a leading recycler, and the Greenstar acquisition was a key part of that.

At the time, we did some IT integration but we didn't address Greenstar's legacy telephony so there are some savings to be had there as well.

Were you always looking for one supplier to provide everything from mobile to the wide-area network (WAN) and wireless?

My mind was made up that we wanted the WAN and the IP telephony to come from a single provider, because IP telephony is so dependent on the network.

We evaluated what the best commercial and technological outcome would be, and it was to go for a single provider for the whole lot.

Why did you pick Azzurri?

We went through a competitive tendering process, and Azzurri had the most compelling commercial proposition that ticked all of our functionality boxes.

One clever thing that they offered is the ability to keep our Cisco IP phones, but 'flashing' them so we can put a standard SIP programme on there. That means we can hook all of our IP telephony up to the Avaya switch and remove our Cisco equipment. From a cost perspective, that's the right thing for us right now.

The other bit that was commercially attractive is the mobile tariff partnership that they have with O2, which means that any calls with Biffa, whether they are fixed-to-mobile, fixed-to-fixed or mobile-to-mobile, are free.

We wouldn't have been able to achieve that if we'd gone to a third party for mobile services, or if we'd stuck with Vodafone, our incumbent provider.

What savings do you hope you to achieve?

It's quite complicated to predict what our total cost of ownership will be, but as a ball-park figure, we would have expected to spend around £7 million on communications – including mobile – over the next three years. This will bring it down to £5 million, which is a really significant saving.

What do you hope the organisational benefits will be?

We are doing more and more with our network all the time. For example, we have a big drive around health and safety – waste management is the second most dangerous industry in the UK.

A huge amount of our health and safety training goes across the network. We use collaboration tools such as GoToMeeting and streaming videos.

But some of our locations are really struggling with bandwidth at the moment, and these kinds of things just won't work for them.

We also used a lot of CCTV as we operated a huge portfolio of property, some of which is unmanned or has lone workers. We would like to do more streaming of CCTV across our network.

Also, we are a mainly mobile workforce. We have 6,000 employees, and 4,500 of them are generally out and about in our trucks. So we make a huge number of conference calls every week, and having a more joined up platform will just help to simplify that.

Are there any other IT programmes that this contract will impact?

We recently ran a trial of giving iPads to our sales staff. When you sign up for a waste service, there's a fair bit of documentation, but with an iPad it can all be done in half an hour. So we're going to be rolling out 60 more iPads, and we'll be using Azzurri's mobile device management offering.

We're also getting ready to upgrade our in-cab equipment [i.e. mobile devices inside trucks]. We currently use 1,800 ruggedised devices from a company called Spirit, which we've had for five years now. Towards the end of the year, we'll be upgrading to 4G-enabled Windows 8 devices so that we can do more out and about.

And thirdly, we've been working on a new web portal for our 65,000 collection customers. We have a portal now, but it's very limited in its functionality.

As part of that project, we're moving all of the core infrastructure to a colocated data centre, with Phoenix Datacom. Clearly, the network will be fundamental to that.

What role does Biffa play in managing the implementation?

With all these projects going on, programme management is very important. So we’ll be running a lot of workshops, aligning all the plans and doing a lot of the coordination to make sure that things are working the way we want. The devil is in the detail.

Ben Lobel is the editor of SmallBusiness.co.uk and specialises in writing for start-up companies in the areas of finance, marketing and HR. More by Ben Lobel