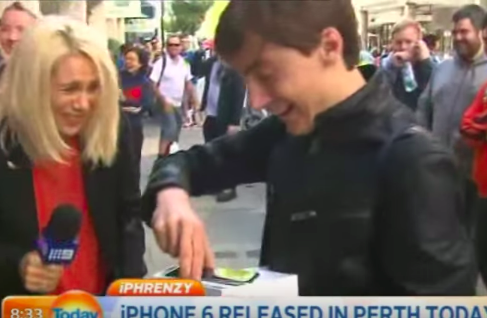 This time last year I was involved in an unusual incident that saw me inadvertently grab headlines around the world. I became a viral sensation for dropping my brand new iPhone 6 straight onto the sidewalk whilst doing an interview for Australian TV.

The drop gathered more than 20 million views on a single YouTube video and a huge amount of press and social media attention. I was asked to do interviews for both local and international media.

The attention was unbelievable and at the time was extremely scary and hard to handle. It felt like the whole of the world was talking about me, because they practically were. I tried to ignore it, but it was hard to do when my Twitter, Facebook and phone was going off every two seconds.

It took weeks for it to die down and for me to get back to a partly regular life. I still have people bring it back up and remind me of the incident, to which I now laugh off as my two minutes of fame. I even get called famous by people I have never met, which is very weird.

I absolutely loved my new purchase. Compared to my previous phone, the iPhone 4S, it was perfect. It ran fast, had a great screen and took stunning photos.

For a long time it did everything I wanted it to do, and it basically became my third arm. I only had one problem with it when the camera slipped, but Apple repaired the screen free of charge in an hour and that problem has been resolved.

Will I be buying the iPhone 6S? Well, that depends if I win the lotto.

That's not me saying the device is expensive, but at the current time I don't feel the need to pay over $1000AUD to upgrade my device, and as a student I unfortunately don't have that kind of money.

Do I think the new phone will be successful? Yes. The new Force Touch technology is something we haven't seen in smartphones before and will definitely draw huge numbers to the device, as will the live camera feature.

Apple has apparently order an unprecedented number of units for this release –  and if it's anything like last year’s launch, they will sell fast.

I just hope they improved the box.