Can drones be taken seriously in the supply chain? 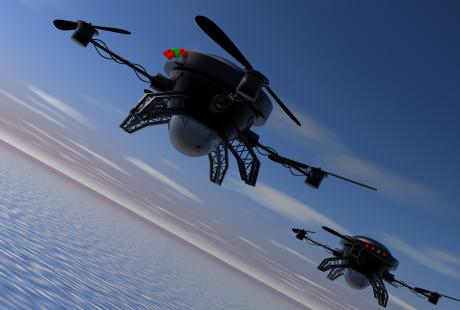 Drones have the potential to revolutionise supply chain and logistics, a notion not lost on retail behemoths Amazon and Walmart, which have been trialling warehouse and home delivery projects for well over a year.

More recently though, drone strategies have been taken to the next level, with Amazon announcing a partnership with the British government to run tests to explore the feasibility of using drones to deliver small parcels.

The implications of this are significant, given that 90% of Amazon’s sales involve products weighing less than five pounds. In the US, 7-Eleven have even made their first commercial delivery by drone, demonstrating that drone deliveries are far more than just a pipe dream.

From a technology perspective, the capabilities of drones are improving day by day – advancements in autonomous piloting, ‘sense and aware’ technologies and increased battery life mean that delivery drones are now very much a potential for the future.

For users, it is expected that drones will reduce costs and speed up traditional supply chains, deliver an additional source of data gathering and provide added convenience because they are not restricted to postcodes.

However, a lot of preparation is still needed before drone delivery in everyday supply chains becomes feasible.

Before drones can be commercialised, we will need concrete legislation that outlines parameters of how they can be used. Only once an enabling policy framework is in place can the drone market fully develop.

The UK is slightly ahead in legislative terms, as certain guidelines around the use of drones already exist. The Civil Aviation Authority’s ‘The Drone Code’ requires drones to be flown in direct visual line of sight of the pilot; away from congested areas, aircrafts and airports; at least 50m from people, vehicles and structures; and under 400ft.

These stipulations are accompanied by other barriers, such as 20kg weight limits. As drones can only travel short distances and with light loads, they are currently only suited to delivering smaller packages to a consumer customer base.

Therefore, it is likely to be some time before the technology is able to sustain the volume and consistency of B2B services, as work will need to be done to increase load lifting capacity and journey endurance.

Furthermore, cybersecurity fears are among the biggest obstacles, given that drones require a wireless connection to an operations centre, making them potentially vulnerable to hackers. There are also concerns over whether drones will be used to complement existing jobs in the supply chain or replace them outright.

Despite some stumbling blocks, the market is projected to reach $5.59 billion by 2020.

To make these expectations a reality, it is likely the government will call for companies to register to operate drones and that organisations will need to prove they have a strategy in place that complies with legislation.

As drones show promise to be the next disruptive technology within the supply chain, businesses, would do well to start investigating strategies now to see if they would fit their business model.

Whether to speed up retail deliveries or bring key parts and equipment to heavy industry projects, drones have the potential to enhance process efficiency and reduce costs.

Businesses should start seeking help from experts to understand the technological challenges, practicalities and limitations of using drones as part of the supply chain process before dismissing altogether or indeed going all in too quickly.