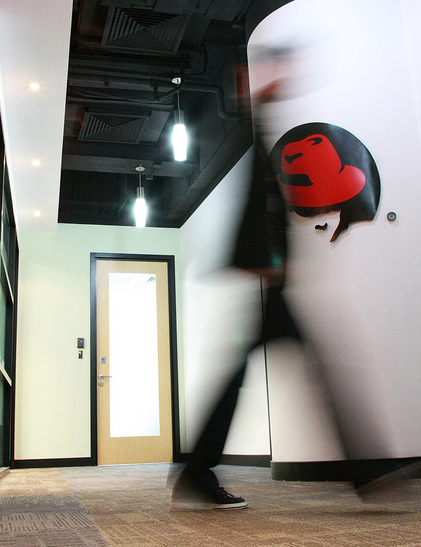 “No CIO I know cares about Linux”.

That was a bold statement coming from James Whitehurst, CEO of Red Hat, a company that derives 70% of its revenue from an enterprise distribution of the open source operating system. He made the remark in December, on a conference call with investment analysts.

But he was not pulling a Gerald Ratner. Whitehurst was simply observing that an organisation’s choice of server operating system is a hardly an executive-level concern.

“It’s so far down in the stack,” he added. “Yes, [CIOs] know they use it, and they know it helps them save money, but that’s not what makes it strategic.” Instead, he says, CIOs are concerned with storage, with middleware, with virtualisation, and with cloud infrastructure. Of course, these just happen to be the very three product categories that Red Hat has added to its portfolio since 2006.

A company needs no reason to expand its product portfolio other than to make more money. According to Red Hat, the addressable market for operating systems is around $15 billion. For its whole portfolio, it is $53 billion.

But Whitehurst’s remarks reveal an ambition to become what is often termed a “strategic” supplier to its enterprise customers – in other words, for those customers to standardise on its software all the way up the stack.

This would be a remarkable achievement for an open source software company – not so long ago, enterprises would question whether they could even run Linux in production. But according to Werner Knoblich, Red Hat’s VP for EMEA, the company has had some success already.

“There are only a few customers that are huge users of [middleware platform] JBoss and not big Red Hat Enterprise Linux (RHEL) users,” he says. “Internally we build JBoss on RHEL so it is an optimal environment.”

There is much more of the stack for Red Hat to occupy, however, if it has a chance of giving the likes of Oracle or IBM a run for their money in the “strategic” supplier stakes.

The storage of Red Hat

Red Hat entered the storage software market in October 2011, when it acquired a commercial open source vendor called Gluster. “They wanted to be the Red Hat of storage,” says Knoblich. “Instead, they became the storage of Red Hat.”

Gluster’s product, now known simply as Red Hat Storage, is a distributed file system that allows customers to store ‘unstructured’ data on commodity hardware – whether it is in the data centre or in the cloud. “It does for storage what Linux did for UNIX,” says Knoblich. “It breaks the vertical integration of software and hardware.”

One user is US music streaming website Pandora. If a song suddenly becomes especially popular, Pandora can seamlessly add storage from Amazon Web Services to its storge environment to maintain playback performance. Another use case for Red Hat Storage, Knoblich says, is to support a Dropbox-like file storage platform.

So far, however, there have only been a few production deployments of Red Hat Storage.

In September 2012, Red Hat also threw its hat into the cloud infrastructure ring, announcing that it would sell an “enterprise version” of open cloud platform OpenStack.

The OpenStack project was started in 2010 by US space agency NASA and hosting provider Rackspace to build the software needed to run an intrastructure-as-a-service platform. It comprises a number of modules that allow virtual servers, storage and network resources to be provisioned and scaled through software.

Knoblich says that the various components that Red Hat is bringing together will customer to achieve what he says is the consensus vision of the future of the data centre. “The clear trend is that everything goes onto standard x86 hardware, whether it is in the private data centre or the public cloud, and will be managed by software,” he says. “A server which is today a compute node can tomorrow become a storage node, or the next day a switch, whatever the requirements are.”

(This remark highlights what is absent from Red Hat’s stack: a software-defined networking play. Knoblich says that there is no specific strategy he can talk about. But he does say that Cisco – the company that many see as the biggest potential loser to SDN – is “much more open to working with companies like us” since VMware’s acquisition of SDN pioneer Nicira).

Still, even Red Hat’s most successful non-Linux product, JBoss, accounts for less than a third of its revenue. The company’s apparent goal to become a “strategic” vendor is clearly for the long term, and much stands in its way. Then again, Red Hat has successfully defied those who doubted that Linux could ever become an enterprise-grade operating system