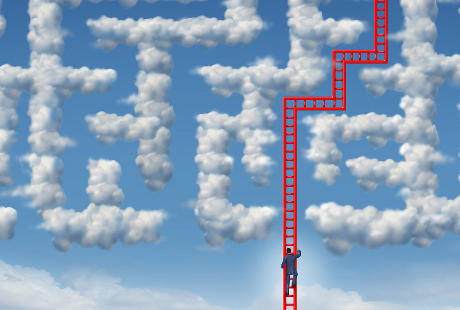 New research findings from infrastructure as a Service (IaaS) provider Databarracks suggests a worrying lack of confidence among IT professionals in their cloud competency.

The survey of over 400 IT professionals revealed that 43% of UK IT professonals rate their current competence in cloud implementation and management as either poor or very poor, with only 7% rating it as excellent. This is despite the fact that 64% of organisations questioned currently using at least one cloud-based service.

54% of respondents said they received no cloud training in the past 12 months, with 53% admitting to having no plans for training in 2014.

'There is no reason cloud computing should be something for the IT department to fear,' said Peter Groucutt, managing director at Databarracks, 'but employees must ensure that they remain relevant in today's changing market by gaining the appropriate skills and qualifications.'

But this discrepency between skills and the new tools being introduced may prove disastrous in the long term, commented Pontus Noren, co-founder and director of cloud specialists Cloudreach.

In the face of rapidly increasing cloud adoption, Noren believes that the skills gap must be plugged as a matter of urgency.

'The lack of training and understanding of cloud-based technologies within organisations is incredibly worrying,' he said.

'Whilst some IT professionals may take it upon themselves to up-skill, leadership teams should clearly be doing far more to ensure that skills development and education is part and parcel of using new technologies and services like cloud. To make the most of the cloud, companies need to undergo a company-wide culture of change, and that change can’t happen overnight.'

Cloud has now moved past the hype phase, said Noren, and onto the first step towards maturation.

'It’s no longer a case of ‘if’ businesses will be adopting cloud services,' he said. 'It’s now a matter of ‘when’. It’s insufficient if you’re an IT professional to say that you have a poor or very poor competency level when it comes to cloud management and implementation because the industry is only going to grow over the next decade. It’s a critically important skill that all IT professionals should master, otherwise they face the threat of becoming extinct.'