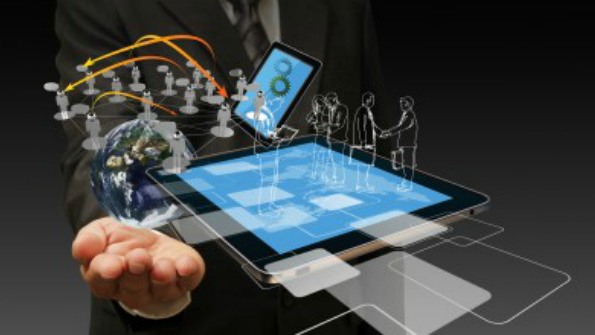 “We live at a moment when the majority of people in the world have access to the internet or mobile phones – the raw tools necessary to start sharing what they’re thinking, feeling and doing with whomever they want,” he wrote.

“We think the world’s information infrastructure should resemble the social graph – a network built from the bottom up or peer-to-peer, rather than the monolithic, top-down structure that has existed to date.”

At Information Age’s recent Social and Mobile Business conference, delegates heard how social media and smart mobile devices are sowing the seeds of that transformation in a business context.

For some organisations, social technologies are bringing that peer-to-peer quality to internal collaboration. One example is mobile telecommunications provider O2 Telefónica.

A few years ago, Shomila Malik, the head of O2 Telefónica’s Enterprise Innovation Lab, was thinking about the company’s collaboration culture. She saw that it was open and participatory in face-to-face meetings but that did not translate to its internal collaboration systems. “We had an open culture in the office, but not online,” Malik explained.

Malik decided to try out enterprise social networking technology, and plumped for tools from US provider Yammer. The software is reminiscent of online micro-blogging services, but has extra functionality for forming groups and teams within an organisation.

She quickly found that employee participation was similar to the usage patterns of public social networks – 90% of the O2 employees that signed up for the service never posted anything, while most of the content was produced by just 1% of the users.

Nevertheless, it introduced a number of benefits. “The best thing is for on-boarding new employees,” she said. “All you need for Yammer to work is a corporate email address, so you get access to the network before any other IT systems. This means that new starters can go on Yammer and see the kind of culture and conversations that are going on. Lots of people came up to me and said it was one of the most useful things from their first week.”

Malik says that Yammer has become O2’s tool of choice for social collaboration, and it has recently been given the go-ahead for full worldwide implementation.

Next>>> Engaging the customer

Some companies are using social media to reach out beyond the boundaries of their organisation. As David Keene, vice president of event sponsor Salesforce.com, explained, social networks are becoming an increasingly important tool in marketing. “Facebook pages are replacing websites as the marketing channel of choice,” he said.

In some cases, businesses are building their own social communities to improve engagement with the outside world. Hand-held device maker Psion, for example, has placed an online community at the heart of its reinvigorated partner strategy.

Having been the darling of the UK technology sector in the 1980s and 90s, Psion and its personal digital assistants (PDAs) were later eclipsed by the mobile phone revolution. It switched its focus to industrial devices but still languished for much of the last decade.

In 2008, new CEO John Connelly made the modular design of the company’s technology the focus of its go-to-market strategy, inviting partners to build on its core components to create new products for niche markets that Psion could not reach on its own.

That placed collaboration at the heart of its turnaround strategy. But according to Jonathan Brayshaw, global leader for digital communications, Psion had not historically been an “easy business to do business with”.

To rectify this, Psion decided to build its own social network, called IngenuityWorking.com. The site consists of discussion forums and blogs, and allows employees and partners to ‘follow’ one another’s activity.

Not only has the site had the desired effect of promoting collaboration – a number of new products have been devised and developed on the site – it has also become a valuable source of information for partners and customers, Brayshaw explains. “Customers are answering each others’ questions on there,” he says.

For Brayshaw, though, the real value of the site is that it allows employees to contribute to the business beyond the confines of their job description. “There’s been a mindset shift among our employees,” he says. “You do your job, but you can also make a broader contribution to the company and its community.”

It is testimonies such as this that lead some to believe that social collaboration will soon be an essential layer of the enterprise information technology stack. This was the argument made by Alpesh Doshi, co-founder of social business consultancy Fintricity.

Doshi believes that the ‘social layer’ will in future be the point of interaction between employees and the underlying business applications and data repositories.

The way that it works today is that you access an SAP or an Oracle system directly through a dedicated front end,” he explains. “But in the future, applications will be accessed via a digital workspace that is socially enabled.”  Furthermore, Doshi said that the role of enterprise architects is destined to become more social in nature. He believes it will be their job to understand the ways in which employees collaborate and interact within the workforce and to adapt the enterprise architecture to facilitate that behaviour.

Just as social technologies are changing the way in which employees share information and communicate, mobile devices are giving rise to new ways to consume information.

This point was illustrated by Paul Johnson from IMS Health, an information services provider for the pharmaceuticals sector.

IMS tracks more than 36 billion healthcare transactions every year, including 80% of all pharmaceutical sales worldwide.

Drug-makers use this data when selling their products to doctors and hospitals – but not as much as IMS wanted. Despite the scientific nature of the industry, the sales reps from pharmaceutical firms were more reliant on personal relationships and gut feel in closing deals than hard data.

For one thing, the BI systems that these companies have used in the past would create static reports that were no use on the road or in a one-to-one sales meeting.

But IMS knew that its data would help its customers make deals. Its solution was to “make data analysis fun”, Johnson explained.We wanted a tool that could do interesting things with our data.

IMS ended up selecting mobile BI software from a company called Roambi. This allows sales reps to display and interact with the company’s data using their tablet or smartphone, via an interface that is fun to use.

The response to the mobile BI software has been very positive, Johnson said, both from pharmaceutical salespeople and the doctors they sell to. “It means that a salesperson can make an informed call on a doctor, not based on the fact that they are friends or because they’ve been buying the doctor coffee for 20 years, but by revealing underlying trends in data about the drugs the physician needs.

According to Robert Fillmore, VP at cloud-hosted document management and collaboration service SkyDox, the adoption of social and mobile technologies is being driven by ‘Generation Y’, employees who were born between the mid-70s and mid-90s. “Generation Y is coming into the workplace and changing the way that businesses run,” he said.

That is not without risk, he warned. When the workforce is regularly tweeting, mobile working and collaborating online, keeping information under control becomes much more complex, Fillmore said, but necessary nonetheless.

“As a CEO or IT director, I want to make sure that I know where all my corporate resources are,” he said. “I need command and control with security, and I need all that to integrate to existing systems. It’s a big ask.”

Achieving this level of control over information in the face of the consumerisation of IT is arguably the defining challenge facing IT leaders today. However, as delegates at the Social and Mobile Business conference heard, there is every reason to embrace that challenge.