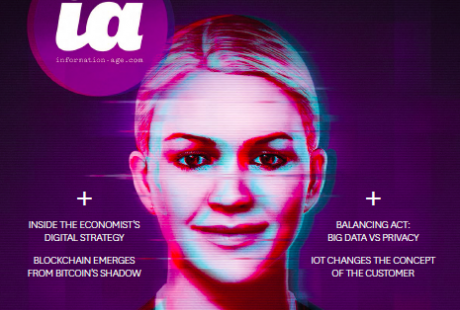 The world’s most innovative companies – led by the likes of Google, Facebook, Amazon, Apple, Microsoft and IBM – are betting on machine intelligence as one of the most important technologies to disrupt the world in the years ahead.

Its impact will be widespread, but perhaps the most direct way it will impact people is in the workplace. The automation of processes and services will come faster and stronger than many people anticipate.

In a recent study, 94% of businesses said a robotic future is inevitable, and almost half believed between 10% and 30% of their organisation to be immediately automatable.

Unsurprisingly, IT was the department most committed to artificial intelligence, robotics and process automation in the research.

To reflect this transition, the cover star of this issue of Information Age is not the usual human being, but a cognitive agent called Amelia who will soon be a new addition to Enfield Council.

The North London council is the world’s first public sector organisation to deploy an artificially intelligent agent, and we speak to its head of ICT about what this means for both its employees and residents (p. 12).

In a month when Pokémon GO became the most active mobile game ever following just five days on the market – sending Nintendo’s share price rocketing and transforming the gaming market in the process – we were reminded just how drastically technology drives society today.

I was in New York City when this was all going down and was astounded by how quickly these days – in the age of social media – such a simple concept grows into something enormous.

After all, it’s hard to call Pokémon GO all that clever – bringing together a tried-and-test (and universally adored) franchise from 20 years ago with a couple of technologies that have also been around for years now (augmented reality and location-based gaming).

Then again, technology doesn’t need to be groundbreaking or even original to be ludicrously successful – a lot of the time, and evidently with Pokémon GO, it just needs to capture a moment and execute it well. But if we knew how to do that, we’d all be billionaires.

Also in this issue: