Is FinTech a bubble? 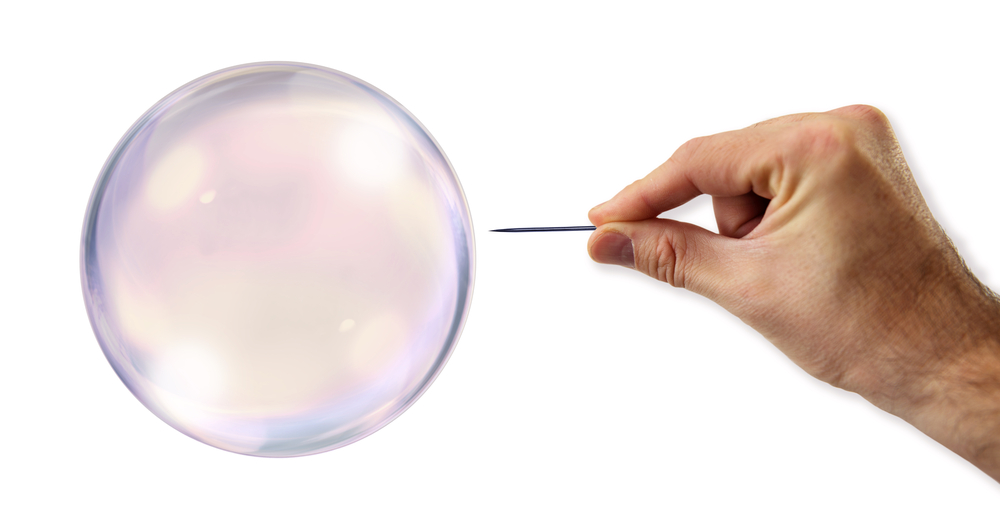 Estimated at a value of over $12 billion, there is no doubt that the FinTech sector is booming. Investments have sped up in this sector, with UK companies securing £342 million worth of funding last year and the government increasingly pledging its support to the industry.

However, many cynical industry analysts believe that what comes up must come down. Are valuations based on real worth or buzz and excitement? Are we at risk of a FinTech bubble?

This question has been floating around the wider tech industry for some time. With flexible cloud-based systems making it possible to launch a company with relative ease and speed, companies have shot to record-breaking valuations faster than ever before. In fact, there are now so many billion-dollar tech companies, they’ve been given their own title: unicorns.

Some analysts point to these stratospheric valuations, along with the growing difficulty and cost of finding suitable technology talent, and extravagant employee schemes, as proof that this sector is spiralling out of control. Netflix is offering unlimited parental leave, Gravity Payments a minimum $70,000 salary and Ask.com unlimited holiday.

Such fear is understandable – just 15 years on from the catastrophic dot-com crash, we are experiencing valuations and market activity like never before. At the turn of the millennium, many naively believed that the only way the market could go was up – and demand would grow forever. Clinging on to this idea of infinite demand, would-be tech entrepreneurs assumed that all they had to do was figure out what people wanted.

Such optimism was not entirely unfounded. Investors were fighting to be part of this new era of enterprise, and valuations soared on the stock exchange. However, when the truth was unveiled and it transpired that the market did not have room for everyone – as demand was not so infinite after all – the consequences were fatal for many companies. In less than a month, nearly a trillion dollars’ worth of stock value completely evaporated on NASDAQ.

Against this backdrop, industry experts can be forgiven for urging caution in today's current market. With so much activity in the FinTech space at present, there is of course a risk that this could develop into a bubble.

However, what differentiates a number of innovative FinTech start-ups from the technology enterprises of the 90s is their inherent significance within society.

FinTech business models are based on more than just a different consumer interface – they offer services that are core to businesses and consumers. While demand is never infinite, so long as the global economy is growing there’s going to be a continued demand for finance – whether that service includes providing money, storing it, transferring it, or trading it.

Unlike low-margin technology disruptions that rely on their user-friendly websites and a different way of selling something, FinTech has huge growth potential. The financial services industry is worth £127 billion to the UK economy and FinTech is only just starting to realise the full opportunity within this market.

It’s worth remembering that even in the worst-case scenario of a bubble burst, there will be survivors. Amazon’s share price may have dropped by over $100 during the height of the crash, but the company is still here to tell the tale, with a share price exceeding its 90s boom.

The key to surviving a market boom and still being relevant in ten or 20 years’ time is the ability to adapt to the changing environment. In a sector heavily dominated by traditional players, FinTech has introduced a new era of finance.

The old model, which relied on banks developing services and retrofitting them to their customers, has now been turned on its head. Today, customers rule the roost and FinTech firms have developed flexible models that adapt fast to changing customer needs and requirements.

While banks have run on their ageing legacy systems and relied on their market dominance to justify high fees and slow transaction times, FinTech businesses have introduced flexible alternatives to accessing traditional services at reduced speed and cost.

So does FinTech have a future?

Nonetheless, while banks may be slower to adapt than their younger FinTech counterparts, they are not disappearing any time soon. As the core of our economic infrastructure, the majority of banks will survive in the case of a market crash – even if that requires public support.

FinTech companies that wish to thrive alongside them and realise the heights of their full market potential would be wise to focus on how they can implement their flexible services to help banks navigate the evolving tech landscape.

Only the strongest FinTech corporations will survive and thrive in this competitive market. Smart players will identify ways to boost core financial infrastructure – guaranteeing their relevance whichever way the market turns.