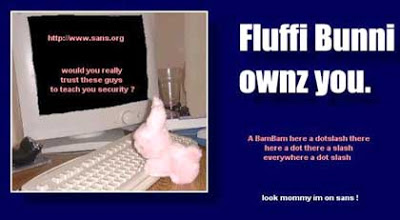 30 April 2003 The alleged head of a notorious hacking group known as ‘Fluffi Bunni’ was arrested at the first day of the InfoSecurity trade show in London.

The man, Lynn Htun, is being held on forgery charges and may face extradition to the US where he is wanted in connection with a series of high profile attacks. Fluffi Bunni specialised in hacking the web sites of computer security organisations and leaving behind humiliating messages, including the trademark pink rabbit.

“He was clever and had the patience of a saint. The targets he chose were ones that were really high profile and ones you’d think would be above reproach when it comes to issues of security,” Jay Dyson, a security consultant told Associated Press.

When Fluffi Bunni broke into the web site of Security Focus, now owned by Symantec, Fluffi Bunni did not attack the organisation directly, but broke into the computer that served adverts to the site and replaced them with derogatory messages and a picture of a cuddly pink rabbit at a keyboard.

Fluffi Bunni’s other victims include the SANS Institute, Attrition.org, Apache.org, burger chain McDonalds and NetNames, which was possibly his most disruptive attack.

The NetNames hack followed just days after the 11 September terrorist attacks, in which the NetNames’ domain name service (DNS) was hijacked by Fluffi Bunni and, instead of routing traffic to Totaljob.com or VNUnet.com, the service directed traffic to a “Fluffi Bunni goes Jihad” diatribe.