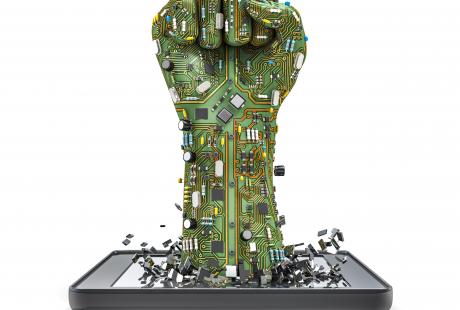 Something big has been happening – the Fourth Industrial Revolution – so it’s not hyperbole when Klaus Schwab, executive chairman of the WEF,  says: “We stand on the brink of a technological revolution that will fundamentally alter the way we live, work and relate to one another.  In its scale, scope, and complexity, the transformation will be unlike anything humankind has experienced before.”

Long time business and technologies leaders may be tempted to see this as the normal hype that surrounds major new technologies like the Internet of Things (IOT), big data, and the cloud.

Whilst this tech is exciting and a key component of the Fourth Industrial Revolution, the changes at hand are deeper and more substantial than just an expanded tool box.

We’ve been writing about this oncoming transformation for some time, and what lies ahead is not simply more tech, but a radical reshaping of the relationship between technology capabilities and business opportunities.

It is a fundamental change that shifts the role of technology from creating “digital assets” to being pervasively embedded within a “digital business”, an organisation whereby most creative market opportunities are shaped and enabled by technology.

IT began as a support function to the business, enabling scalability and efficiency as part of the third industrial revolution.

While information mattered, it was not the principle source of business value, so technological development could often proceed on its own slow steady course, separated from the hurly burly of a shifting marketplace, a process and control dominated relationship conducted at arms length.

This team level collaboration was the beginning of a shift from the third to the Fourth Industrial Revolution.

The final step in this evolution requires a much deeper enterprise-wide disruption; a new way of thinking and working that moves technology into a position where it is the prime enabler of new business opportunities.

At ThoughtWorks we call this “tech-at-core” and it is quite literally game changing.

While there have always been technology driven innovators, they were seen as crowding into the NASDAQ and competing within their own private club.

That is no longer the case, as today every business is fundamentally a new kind of digital business with technology at the core.

These possibilities are both deeply threatening and immensely exciting. They are forcing business and technology to draw together in a shared ownership of the future.

This is not just about the use of a new technology or the introduction of a new product.

Uber’s story suffers from overexposure but even with all the print dedicated to it, the point of the change is often missed.

Uber didn’t just field a better service offering or find an innovative use for mobile technology – they redefined the rules of an industry.

At Uber, Garrett Camp and Travis Kalanick did this by architecting a fundamentally new business ecosystem with a radically different set of operating constraints.

Instead of being locked into a cab company’s fixed capacity, which is purchased and sustained at great cost, Uber couples variable pricing with on-demand capacity to automatically respond to the ebb and flow of travel needs.

They put more cars on the road when it matters and simultaneously avoid paying for unused capacity in down times.

Uber became the child of disruptive impact, not because it leveraged a dramatic new tech innovation, but because it cobbled together widely available technologies with creative new business strategies.

Its mobile app wasn’t technically groundbreaking, but it redefined the model for customer acquisition.

Traditional taxis were forced to use the same limited resource that earns revenue to troll the streets for customers.

Uber avoids this inefficiency with a customer pull model that can serve periods of even low demand with a car that is a few blocks away.

It’s not a fair competition.

That’s why it only took four years after its 2011 New York City launch for Uber to put more drivers on the street than venerable NYC taxi companies.

The WEF doesn’t sugarcoat the scope of the change ahead.

Kurt Schwab notes that this revolution “is disrupting almost every industry in every country,”  and even as retail leaders like Macy’s retrench, closing stores worth less than the property underneath, customer experiences are ripe for a reimagining that goes far beyond the mechanics of omni channel buying.

Synergies between technologies like IoT and big data are poised to deliver transformational personalisation that could enable retailers to escape from the box that has defined the concept  of “the store” for a hundred years.

The divide between enterprise and insurgent thinking blurs, with neither startups nor enterprises free to focus on traditional areas of strength.

Tech-at-core should be seen as providing innovators with a full spectrum of capabilities ranging from radical disruption to ruthless efficiency.

This transformation is not limited to IT or sequestered in a few designated teams.

As a result, a growing team of tech empowered CXO’s is emerging to lead the cross enterprise application of technology.

These leaders are developing enterprise capabilities across the entire spectrum of tech enabled business opportunities.