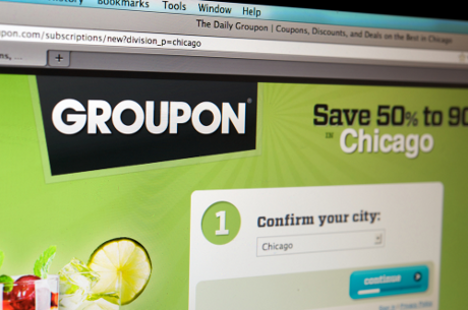 “After four and a half intense and wonderful years as CEO of Groupon, I’ve decided that I’d like to spend more time with my family,” Andrew Mason wrote last month, in an email to employees of the daily deals business he founded. “Just kidding – I was fired today.”

Mason’s method of announcing his ejection may have been unorthodox, but his sacking was no wholly surprising.

Founded by Mason in 2008, Groupon – which offers consumers group short-term discounts online – saw incredible growth in its first two years, and raised $700 million in its IPO in November 2011.

Since then, however, the company has endured dismal financial performance, and its market value has fallen by two thirds since the IPO.

In its most recent financial results, Groupon conceded that its daily deals business has suffered following complaints from both merchants, who say do not get enough of a cut from the deals, and consumers, who say they receive too many emails from the company and poor customer service.

There is evidence elsewhere that online coupons are falling short of the hype that surrounded them two years ago.

Groupon's main rival LivingSocial, in which Amazon invested $175 million in 2010, has also been sliding steadily downhill. The company made a $650 million net loss for 2012, which included a $579 million write-down of overseas acquisitions, and laid off 9% of its workforce.

Other companies still clearly see an opportunity in digital coupons, though. In March, Weve – the mobile commerce joint venture between O2, EE and Vodafone – announced that it will conduct a pilot for mobile coupons later this year.

So are Groupon and LivingSocial merely bad applications of a good idea? Or is there something inherenly misguided about online daily deals?

I've always said that the daily deals model is a fundamentally good one: you take no inventory and you make a healthy margin.

The fact that Groupon has been challenged is entirely the result of its own doing. Groupon grew very quickly very early on and saturated the merchant and shopper community within a couple of years, and then had nowhere to go.

It was trying to maintain its perch as the world's fastest growing company, which isn't the same as being a solid, profitable company. The deceleration in the company’s growth should have shocked no one.

I don't think the business model has run out of steam but it was never going to experience unbridled growth for the next decade.

Before the IPO I asked for people's experiences of Groupon, which were universally negative. Even people who had applied for coupons had not used them, so there were alarm bells ringing from the word go.

From both sides of the business equation, for suppliers and consumers, Groupon rang so many alarm bells that I was not at all surprised with what occurred after that point.

Groupon's business model was very easy for others to copy, which indeed they have done. I think it was also very much a fad and I think that Groupon’s business model is totally and utterly flawed.

That isn't to say that coupons aren't of some value – I use them myself.