Analysts believe that the arrival of 5G will result in a time when edge computing is essential rather than optional. The 5G network’s speed should be 10 times faster than what the 4G network allows. That improvement opens possibilities for far-away sensors to instantly give updates about the connected devices. That increase in real-time processing will require new equipment with enhanced capabilities.

This will also raise the demand for edge computing since that method processes data at the borders of a network rather than transferring the data a significant distance first. A report from Allied Market Research sees the global edge computing market growing exponentially over the next few years, citing the emerging 5G network as a major factor presenting growth opportunities for the sector’s major players.

5G networks are also set to become more complicated than they are now. Investments to make that happen are already underway, thereby increasing the relevance of edge networks in the world’s future. Some say the edge networks will largely depend on device functionality, with the networks’ characteristics matched to the gadgets that need them.

An autonomous car would need extremely speedy edge networks, primarily because characteristics in a car’s environment could change by the second. Processing data at the edge on the 5G network allows saving power and infrastructure. But, the location of the edge device depends on the application. 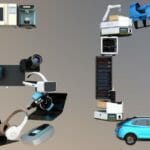 With 5G set to drive a new era of IoT adoption, enterprises need to think about the possibility of new security vulnerabilities

Business leaders must be mindful that there are still a lot of specifics to work out regarding the 5G network and edge computing. Thus, it’s too early to know for sure about the specific ways that edge networks will get more complicated, but evidence suggests it’ll happen soon and be device-specific.

Moreover, because the edge networks will depend on the devices that use them, variations will exist concerning whether network operators would own them, buy or lease them through service models or rely on established cloud providers to help.

Iain Gillott, the president and founder of research company iGR, took part in a panel discussion at the 2019 Consumer Electronics Show (CES). During it, he confirmed that network ownership would change per application, as well as latency and the location of the edge network. This trend is now showing signs of emerging in the market.

Beamforming technology allows a signal to position itself in the direction of the device that receives it. This advantage gives stronger, faster signals. Deutsche Telekom, for example, is working with edge computing to investigate the impact of user-tracing beamforming antennas with 5G infrastructure.

In this case, software electronically directs the 5G signal towards a user’s handset to increase efficiency and signal quality. The accompanying edge computing platform is a fully virtualised, end-to-end solution that supports using this kind of 5G beamforming technology for the first time in a live environment. On a broader scale, this Deutsche Telekom facility wants to center on specific use cases and encourage app developers to investigate the benefits of 5G.

Many people don’t think about what’s happening in the background to help them enjoy consistent connectivity. This is a prime example of how edge networks could lead to better device performance without users even realising it.

The 5G network will undoubtedly pave the way for the introduction of new technologies — including those not even conceived yet. John Maddison is an executive at Fortinet. In a March 2019 interview, Maddison discussed how he believed a lot of the new 5G technologies would be Internet of Things (IoT)-oriented since those devices need low latency to function properly.

He mentioned how security would get deployed differently, and edge networks will play a fundamental role in that. Maddison clarified that as the potential attack surface gets larger, the security risks go up, then mentioned what 5G would necessitate security-wise: “The security then needs to be deployed in a different way. And whether it’s deployed in the car itself, in the application, the IoT devices — it’ll be security deployed in the edge compute.”

We are in the middle of the fourth industrial revolution. While many business leaders are paying attention to energy consumption and automation, is 5G the true driver of Industry 4.0?

Maddison continued: “And edge compute has to be much more efficient than centralised data centres, so you’ll see custom silicon for edge compute deployed to provide security. You’ll see security deployed as virtualised systems in the core networks, and you’ll see connectivity deployed at the internet gateway. You’ll see a much more distributed model of security versus the current model today where it assumes everything goes through a secure gateway; that’s just not going to be true.”

One of the things that cyber security experts often bring up about edge networks is that they can cause security headaches due to the increased number of devices on the network that are gathering data. For example, an edge device deployed in a remote location may not have people checking it regularly for security vulnerabilities or keeping its software updated.

As mentioned in the section directly above, edge networks will play important roles in 5G security. But, many of the benefits they deliver could get overshadowed if the companies using them don’t take extra precautions to maintain edge network security.

Many device manufacturers are already thinking ahead and integrating better cyber security into their gadgets. Doing that could help the 5G network and edge devices benefit each other without causing security threats.

This overview shows that edge networks are essential for helping the 5G network reach its full potential and meet everyone’s already-high expectations for it.

Moving forward, the people who use edge networks for their 5G technologies must take care to minimise any risks, such as those related to security.