How the Internet of Energy will usher in the hybrid home 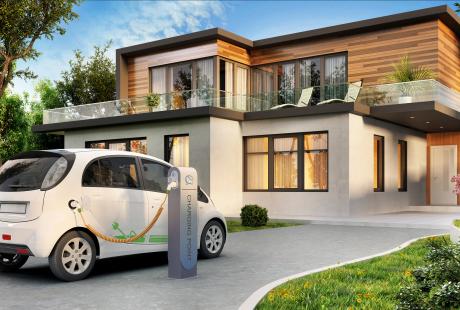 The hybrid home is around the corner.

Fuel consumption in the UK has been consistently dropping for years according to the Department of Energy & Climate Change.

This is mainly due to warmer winter temperatures, a reduction in demands for power during the recession and one other significant factor – the growing influence of technology.

Some of us are already using smart thermostats in our homes, and smart lighting systems have moved way beyond newly refurbished office buildings where facilities managers are keen to meet the energy efficiency regulations.

Smart is now part of a much bigger picture that includes heating and lighting, sensors, demand response systems, thermostats and meters.

It takes into account real-time weather data and the performance of all energy-related equipment. It even has a collective term – ‘the Internet of Energy’.

This derives from the Internet of Things, but is specifically related to the connections made between equipment that generates power, equipment that uses power, and the devices that can control and take vital information from both.

The long-term potential of this powerful triumvirate has technology developers feverishly designing new smart solutions that they can take to the domestic and business markets.

And for good reason. A report from MTW Research last month identified that the added value of features such as smart technology would encourage double digit growth in the heating market alone in the near term.

There’s no doubt that the future of energy usage will be supported by the Internet of Energy.

>See also: Will the Internet of Things be more damaging to security policies than BYOD?

That vital combination of digital intelligence and analysis will enhance the performance of energy systems and improve energy efficiency.

It’s why the Government is putting so much effort behind the smart metering scheme – with everyone in the country equipped, householders will get information about how much they are spending on energy in real-time.

That way, they can do something about it, save money and reduce their emissions into the bargain. Instead of energy being under someone else’s control, we are entering an era where householders have a choice.

But while meters have been hailed as one of the key smart solutions that will transform the energy industry, there’s so much more that smart technology can do, which brings us to the hybrid home.

Think first about cars and the number of clever, energy saving technology devices that have been introduced in the last ten years including engine management systems, stop-start technology, energy regeneration and battery storage.

What these have collectively led to is the hybrid car.

A hybrid home, like a hybrid car, combines traditional and modern ways of delivering power and information efficiently: solar panels, battery storage, smart heating, lighting and hot water controls are all part of the hybrid home.

At its heart is an energy management system that works with the individual technologies to make them smarter.

How? One example is that the energy management system might fully charge the batteries connected to the solar panels overnight because the forecast for the next day is cool.

However, since it links directly into the weather forecast, it can automatically choose not to charge them at all because it recognises that a day of sun is forecast and it will leave the solar panels to charge the battery instead.

>See also: Connected cars are the future, but how far along the road are we?

But it’s not just about the technology. The hybrid home concept is also about engaging the householder with a smart interface that makes the technology accessible, lets them feel in control and that they are getting value.

Not only can they adjust their heating or hot water remotely so that it is at the optimum temperature when they return, but it also provides options – heating for different parts of the house, for example, as it’s needed.

It doesn’t even rely on householders changing their habits – the technology works in the background and today’s modern devices and interfaces are easy to use, and attractive.

The energy industry has learnt a lot from the likes of Apple.

If people do decide to make changes to their energy usage because they can see how much it is costing them, or the impact it is having on their energy efficiency, that’s great.

When you buy a hybrid car you don’t need to learn a new way of driving and the same is true of a hybrid home.