Skip to content
Home » Careers » Recruitment » Is your organisation ready for Generation Z?

Is your organisation ready for Generation Z? 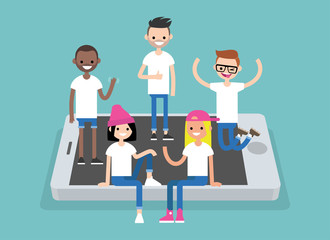 It seems like only yesterday we were talking about millennials entering the workplace, but if you didn’t already feel old enough, it’s now time to talk about their successors: Generation Z (those born from the mid-1990s to the early 2000s).

Generation Z or, as the kids probably like to put it, Gen Z is bringing with it a tech-first mentality. Over the coming years, millions of them are going to enter the workforce, as a result, employers will need to understand them and restructure their workplaces to attract the best from the bunch.

Luckily, Dell Technologies has conducted a comprehensive survey with the “new kids on the block” (a reference I’m sure will go over their heads).

While some will insist that age is just a number, for enterprises the generational gap has significant implications that are hard to ignore. In this article, I’ll reflect on new research released by Centrify based around this topic as well as hearing from social-media stars Woody & Kleiny to see what they can teach us

What does the survey reveal?

The global study conducted by Dimensional Research, which was fielded in 17 countries and 12 languages including 706 individuals from the UK, aimed to grasp Gen Z’s attitudes and opinions of the workplace and the role of technology over the coming years.

Good news for tech advocates, not only are Gen Z optimistic about how technology and automation will impact the workplace of the future, their appetite to work with new forms of technology is seen as one of the greatest attractions to starting their career – 80% want to work with cutting-edge technology and 91% state that the type of technology offered by a company would be a deciding factor in choosing between similar job opportunities. UK research from the study also reveals that almost three quarters (73%) of respondents aged between 16-23 believe that technology and automation will create a more equitable work environment.

Generation Z are also keen to share knowledge be it with humans or machines – 85% would be comfortable mentoring an older co-worker who was not as comfortable with technology as they are and 90% believe we are entering a new era of partnerships with machines – 45% say humans and machines will work together as an integrated team, while the remaining 45% believe machines will continue to be a tool for humans to use as needed.

What impact will technology have on the ageing workforce?

Industries are struggling with a skills shortage and ageing workforce, but technology can help to ease the gap

Claire Vyvyan, Senior Vice President UK & Ireland, Dell EMC said: “It’s encouraging to see that Generation Z want to work in a fair and balanced workplace, powered by advanced technology. They believe this technology will bring equality and will require it of their future employers. To engage this generation, employers will need to invest in both the back and the front office – providing the front-line tools and the machine-refined insight modern workers will look for.”

However, while Gen Z is confident about its own technological skills, there is a significant lack of workforce readiness — 88% have worries about starting work and only half (53%) rank their education as good or excellent at preparing them for their future.

Technology is also not the sole focus for them deciding where to start their careers. According to Dell, Gen Z may be tech-savvy but they’re not robots. Gen Z are looking at more than just cutting-edge technology and a good salary, 32% want to work for a socially or environmentally responsible organisation and half (50%) wanting the ability to learn new skills and have new experiences through their work. More than half (51%) also want work that has meaning and purpose beyond getting paid.

Ian Golding, CIO at the Natural History Museum, said: “We all know how important technology has become at work and in our home lives and Generation Z are well equipped to bring these skills into the workplace. It’s important to empower this generation to see these skills as transferable and recognise how they can be applied to a professional work environment. Through initiatives we run at the Museum, such as Dippy on Tour and Dippy’s Naturenauts app, we’re working to apply technology to real-world scenarios and engage students throughout their education and beyond.”

The bigger picture: the right mainframe talent for the workplace

The digital revolution is changing the face of IT and the skill requirements of those doing the work. Do businesses have the right talent for the future, and what about the mainframe world?