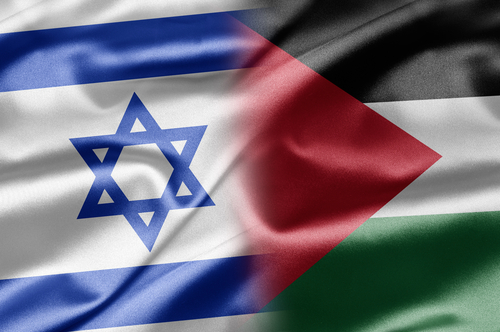 It’s a little-known fact that the internet connection points that bind the entire eastern hemisphere exist in the world’s most conflict-heavy zones: Ukraine and Southern Russia, Israel and Palestine, Iran, Syria, Egypt and Iraq.

Five years ago, internet outages in these regions brought connectivity speeds – and their connected economies – to trickles, as bandwidth was consumed by heavy traffic.

But the economic opportunity for private companies willing to fix this problem, and the international need to connect economies, has forged relationships in many of the most unexpected places, including Israel and Palestine. Is the internet outpacing centuries worth of peacekeeping efforts?

In February 2009, when the Fiber Optic Gulf (FOG) cable was cut, internet traffic for countries like Bahrain was forced over a single route, causing huge congestion. The impact of this slowdown lasted for two weeks, disrupting economies in neighbouring countries.

Just a year before, when several cables in the Mediterranean and the Persian Gulf were damaged, 65% of Middle Eastern and North African networks experienced outages, along with 45% of Persian Gulf and 32% of the entire Indian subcontinent.

These outages greatly impacted business in the affected regions, compelling private companies to create a workaround for when conflicts and disasters threaten economies.

Since 2008 and 2009, there’s been progress to thwart economy-slowing internet outages – mostly in the form of alternative paths built by private companies through countries that are traditionally in conflict with one another.

One example is the Europe-Persia Express Gateway (EPEG), a system that links Europe with the Middle East, which began operating in December 2012. The EPEG allows an internet transit route alternative to the Red Sea, Suez Canal, Egypt and the Mediterranean Sea regions, which have endured both conflict and natural disaster.

The following image from internet firm Dyn maps out these cables travelling through war zones, showing where networks are outpacing peacekeeping efforts.

In the infographic, the black line is the primary submarine path for the majority of internet traffic flowing from Europe to Asia. Conflicts in Egypt threaten to disrupt service to this route, which would have serious economic impacts on companies trading and doing business in Europe, the Middle East and Asia alike, if not for connections to an alternative path (shown in purple).

Since the mid 20th Century, Israel and Palestine have been in conflict over land on the West Bank. The fragile, heated and often fatal relationship between the nations might make a partnership unlikely.

However, as displayed on the graphic, there’s a little-known and underutilised second route that lands in Tel Aviv, crossing the West Bank, Jordan, Aqaba and onto the Red Sea, marked by the purple line. This infrastructure was built despite conflict that exists in the area, connecting vital economic markets.

A third competing path, known as the JADI Link project, marked by the yellow line, travels from Saudi Arabia, through Jordan and Syria, and into Turkey to reach Europe. The flashpoint in Syria currently takes this entire route offline due to conflicts in the country.

In June 2014, when the Iraqi government shut down a portion of the internet in attempts to stop militant groups from coordinating attacks, internet service providers throughout the country experienced several concentrated hours of downtime.

Because of alternative paths, marked on the graphic in blue and yellow, connecting around the troubled network, marked in orange, the global effect was limited.

Rather than a shutdown, slow-downs and poor voice quality over international long distance voice lines in call centres in India were likely the limited effects.

The path marked by the orange line is theoretically complete, but relations between Baghdad and Iraqi Kurdistan complicate its deployment. Ongoing conflicts make it unlikely to succeed in the near term, making alternative routes vitally important.

When several communications cables were severed in December of 2009, traffic in the Middle East and Indian subcontinent was greatly affected. This event was preceded by a series of cable cuts and internet disasters, ranging back to 2004.

This vulnerability and economic risk led to the funding and building of the EPEG (marked by the blue line), which currently routes the conflict zone between Ukraine and Russia and services countries such as Iran and Bahrain – a delicate relationship since the 1980s.

Although the connection point in Iraq remains a point of contention, hopefully economic opportunities can overcome the current conflicts that exist in the country.

As the economies of traditionally conflicted countries work together in the Middle East, connected economies in the region benefit, as does the entire Eastern Hemisphere.

The internet infrastructure is not the solution to peacekeeping, but evidence shows that, in some cases, internet engineers create connectivity solutions that defy the conventional wisdom of international politics.