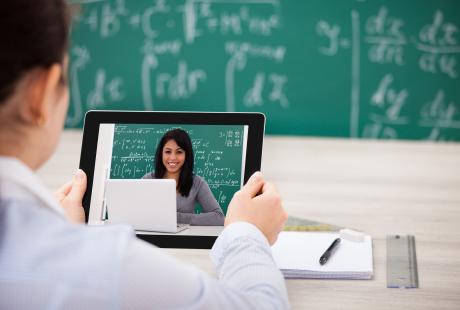 Facebook’s focus on video and immersive content played a huge part in the day, with the company announcing a new API to allow developers to build live-streaming video into their apps and products.

But one announcement stole the show for many of the businesses that use Facebook as a platform to connect with customers – the launch of the Messenger Platform where developers can build and launch their own simple AI chatbots through messenger, allowing brands to engage directly with consumers through messenger for the first time.

Zuckerberg said that when interacting with a business, ‘you should get a quick response, it shouldn’t take your full attention like a phone call would and you shouldn’t have to install an app.’

> See also: The droids you’re looking for: the AI tech that will make up the intelligent enterprise

‘We think you should be able to message a business like you would message a friend.’

‘You should be able to easily communicate with business you care about,’ he said, showing off the new feature by ordering flowers via 1-800-Flowers in Messenger.

Some other beta versions of bots that have Facebook have released include Poncho, a bot which provides entertaining weather forcast, personal shopping assistant Spring, and a news app for CNN designed to provide customised news.

It’s an ambitious vision for the future of brand interaction. But many of the third-party bots themselves are in their early stages of development, and are not yet responsive or instantaneous enough to replace humans.

On first impression, some are bemoaning a slow user experience and clunky interactions that defeat the purpose of opening Messenger instead of just going to Google.

A quick conversation with weatherbot Poncho, for example, reveals it to be very basic and easily confused by simple questions.

As blogger and former tech journalist MG Siegler warns: ‘To be honest, I’m a little worried about the bot hype overtaking the bot reality, already. Yes, the high level promise of what bots can offer is great. But this isn’t going to happen overnight. And it’s going to take a lot of experimentation and likely bot failure before we get there.’

That said, people around the world send 60 billion messages a day through Messenger and WhatsApp, and Messenger is currently the fastest growing app in the US, with just past 900 million monthly active users. To put this in perspective, SMS at its peak global volume 20 billion a day, with Facebook processing about three times as many messengers than SMS ever has.

The impact of Facebook’s decision to open up its messaging API to brands and businesses could be an unprecedented marketing opportunity for many once AI technology begins to mature and the novelty factor is replaced by bots that are functional and simple to use.

‘My advice to anyone building a bot right now is to keep it insanely simple and focused,’ says Siegler. ‘Do one thing great and let the technology catch up to the hype. If you try to fake the magic at a massive scale, you will likely fail. Baby steps.’

Hannah Giles, head of marketing at Zensend – a mobile messaging platform used by brands like Nectar and Daily Mail Group – thinks that the impact of Facebook’s Messenger bot APIs could eventually usher in a whole new era of communication, breathing life into the nascent conversational commerce space.

However, the scale of this consumer shift is huge so the main challenge for Facebook and the brands that use its platform will be around building and protecting consumer trust.

> See also: This 14 year old boy has created an artificial intelligence bot that will make you a happier person

Especially after the recent abusive AI bot Tay debacle which caused a PR storm for Microsoft, rushing in head first to build a bot for your brand might not be the best tactic.

‘Facebook has done a great job of doing this within its social network,’ says Giles, ‘but it will need to ensure that users of its messaging products are also given total control over how and when any brand engagement takes place.’

‘The positive for consumers is that it will start to make brands and businesses more approachable through 24/7 access and a conversational interface which is universally understood.’

‘However, the highly personal nature of the messaging environment means that unless brands are actually adding value to the consumer, it may cause users to move to less intrusive messaging platforms.’