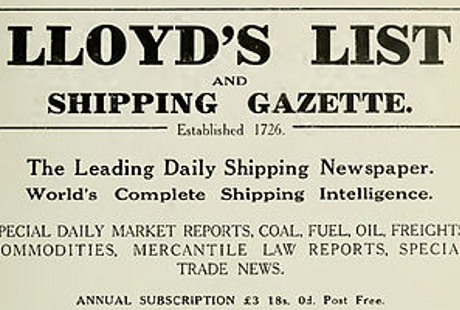 Shipping industry newspaper Lloyd’s List is to close its print edition after nearly three centuries and over 60,000 issues.

The paper was founded in 1726, making it the oldest continuously-running business publication in the world. It began life as a notice pinned to the wall of Lloyd’s Coffee House in the City of London, listing reliable shipping information for merchants’ agents and insurance underwriters.

Today, Lloyd's List publisher Informa announced that the title will only be published digitally as of December 20.

The decision follows months of reader research, editor Richard Meade said in a statement, which found the “overwhelming majority” of readers in support, with less than 2% of customers currently only reading its print edition.

“We have already undertaken years of investment in our digital and mobile platforms,” said Meade. “But the move away from print will allow us more time and resource to build on that with innovative approaches to data and a move bespoke service that offers content tailored to individual needs.”

The oldest continually running newspaper in the world is believed to be Sweden's Post- och Inrikes Tidningar, which was founded in 1645. Now printing mainly government and legal announcements, the title went all-digital in 2007.

The London Gazette is the UK's longest running publication. First published in 1665, the daily publication now contains parliamentary news and announcements such as company insolvencies. It is still printed, although the majority of readers access content online, it says.