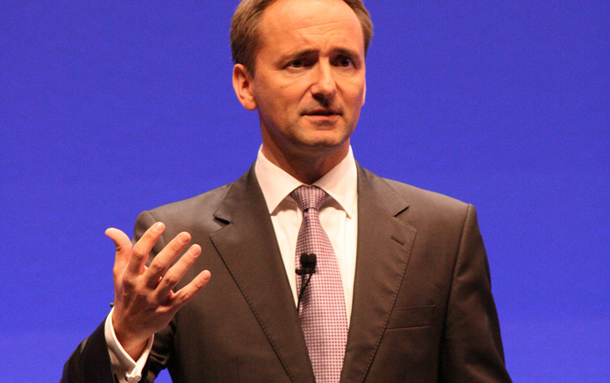 The outgoing co-CEO of SAP, Jim Snabe, has assured UK customers that innovation will continue at the company when the more sales-orientated Bill McDermott consumes the full role next year – but offered his mobile number in case it does not.

Snabe snubbed an invite to Downing Street in order to address the UK & Ireland SAP User Group today at its 25th anniversary conference in Birmingham.

After setting out the software giant's forward-looking strategy – which largely revolved around cloud, mobile and analytics – Snabe was quizzed by the user group’s chairman, Philip Adams, on what will happen when he steps down in May 2014.

Snabe cited personal reasons when he announced his decision to step down in July and move to the company’s supervisory board, leaving McDermott to become sole CEO. Both were named joint CEOs in February 2010.

While McDermott was always seen as the sales and numbers man, Snabe has been attributed to leading the innovation and product-development side of the business. This includes the rise of in-memory database SAP HANA, the fastest growing product in the company’s history.

Snabe was quick to assure that McDermott is in fact capable of innovation, and will also increase his presence in Europe.

“People say that Bill has played a sales-oriented roll because I did the innovate role,” he said. “But Bill is very strong in the vision and innovation as well, so he will be expanding his effort on the innovation side.

“At the same time, he was a little bit ‘the American’. He will continue to be American, but he will spend more time in Europe and understand the diversity, opportunities and value we have in [here].”

However, to test this, Snabe told Adams to invite McDermott to next year’s user group conference, and offered his mobile number if his prediction proved wrong.

“I feel strongly about not just where we are but also the future opportunities together, so I’ll give you my mobile number and hope that you will never need it,” he said to laughs among the audience of SAP customers.

Snabe acknowledged SAP’s past as one “largely run from the sales side” before he and McDermott formed a strategy to generate two-thirds of its growth from organic innovation, rather than relying on acquisitions.

Whilst that is largely true in the in-memory and mobile arenas, the company has struggled with the same in its cloud strategy. Indeed, Snabe and McDermott have signed-off over $14 billion worth of acquisitions during their reign, including $4.3 billion for Ariba and $2.1 billion for SuccessFactors to accelerate its cloud offerings.

However, Snabe emphasised that the acquisitions “added a DNA in the cloud” that SAP didn’t have before, and the company has let engineers from those companies gain bigger roles in SAP, which will help the innovation continue when he goes.

He also pointed to Vishal Sikka, who is now heading SAP’s development force, as a strong resource for continued innovation.

“I believe that leadership is not just about putting a company on-track for success, but it’s also about making sure that you’re no longer needed,” Snabe said.

“If I look at Vishal Sikka, he is a wizard. He can see around corners, and is very deep in his understanding of the impact of technology and the architecture. And in many ways [he is] the father, or at least the son, of HANA.”