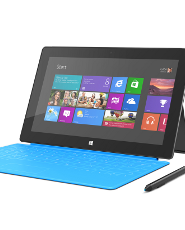 Microsoft's Surface Pro, a tablet that runs the full version of the Windows 8 operating systems and uses an Intel processor, has been met with a largely negative response in reviews.

Writing for the Guardian, technology pundit Dan Gillmor says that the device's weight makes it awkward to use. "It's far too heavy … weighing in at 2lb – far heavier than the competition," he wrote. "It does have a kickstand, but only one viewing angle when using it. An adjustable kickstand would be better."

Gadget guru Walt Mossberg panned the device's battery life on AllThingsD. "In my tough battery tests the Surface Pro did pathetically," he wrote. " It lasted just under four hours between charges – less than half the stamina of the iPad on the same test".

Gizmodo's Kyle Wagner said the device, which uses a combination keyboard and cover, is not viable as a replacement laptop. "The keyboard covers only work on flat surfaces; it’s pretty bulky as a tablet even though it’s well built; the trackpads are barely usable anywhere."

There were positive reviews, however. TechCrunch's John Biggs prasied praising the Pro's internal specs and usability, declaring that the "PC is back".

"It’s a powerful computer with enough speed and graphics chops to give any other manufacturer’s laptop a run for its money," he wrote. "I’ve been using the Pro as my primary laptop for the past week and even traveled with it […] Usually I would test a laptop for a few days and revert back to my MacBook."

Tim Stevens from engadget.com commended Microsoft for including a full-HD display on the device, which was lacking from the Surface RT, which uses an ARM processor and a cut down version of Windows 8.

The Surface Pro is arguably more likely to be used by businesses as it run conventional Windows applications.
It is set to launch with 64GB or 128GB storage and features an Intel i5 Processor with an Intel HD Graphics 4000 chip, 4GB RAM and an expandable SD card slot.

Microsoft has not yet set a release date for the Surface Pro in the UK.