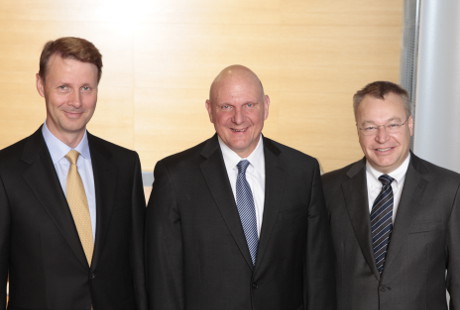 The deal is the apparent culmination of a long-term strategy to bring the two companies together, that began in 2010 when former Microsoft executive Steven Elop took over as Nokia's CEO.

Soon after, Nokia made a strategic commitment to Microsoft's Windows Phone operating system. If that was intended to reverse the company's ailing fortunes, it has not worked yet. In its most recent quarter, Nokia's revenue fell 24% to €5.7 billion.

Under the deal announced today, Microsoft will take control of Nokia's mobile device portfolio. The Finnish company will retain its HERE mapping service, which it will licence to Microsoft, and its future technologies department.

Nokia's network infrastructure business, known as Nokia Siemens Networks until it bought Siemens out of the joint venture earlier this year, will retain the Nokia brand.

Although a departure from Microsoft's historical focus on software, the acquisition chimes with the strategy to become a "devices and services" company that Microsoft announced earlier this year.

Speaking to Information Age this morning, Gartner analyst Carolina Milanesi said that the deal help Microsoft maintain its relevance in the mobile market.

“Competition is intensifying tremendously,” Milanesi. "They have captured Nokia before anyone else could."

According to the latest figures from technology analyst firm Gartner, Nokia’s smartphone market share has taken a dive in recent years, falling from over 48% in 2006 to just 3% at the beginning of 2013.

Golvin's colleague Dan Bieler said the deal is "great value for Nokia shareholders after years of suffering” but added that, Microsoft may be sacrificing its independence by narrowing its choice of handset vendors.

“Microsoft will rely on [Nokia's] Lumia range [of smartphones] to gain a share in the market – not a very promising position for Microsoft to succeed in the mobile space," Bieler said.

The deal is expected to close in the first quarter of 2014, pending shareholder and regulatory approval.

Some observers have remarked that the acquisition puts Stephen Elop in pole positiion to succeed Microsoft CEO Steve Ballmer, who announced his retirement last week.