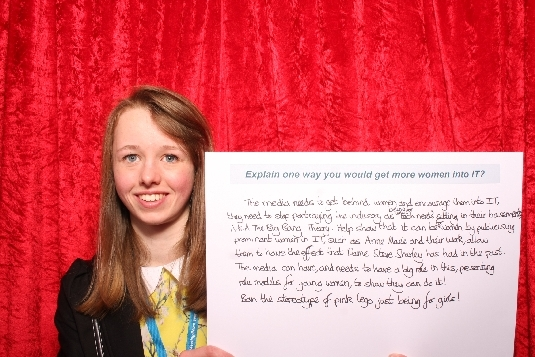 A 17-year-old student from Northampton has scooped the top prize in Network Rail's first ‘Could IT be you?’ competition, designed to show girls what working in IT is really about and the career opportunities open to them.

Zoe Moore, from Sponne School in Northamptonshire, will have her first year's university fees paid for by the rail infrastructure company. Along with five runners up, she will also get a two-week paid work placement with the Network Rail IT team this summer.

The competition was launched in October 2013 after Susan Cooklin, Network Rail's CIO, raised concerns about the rapid slide in the number of women entering the UK's IT sector.

The latest figures from e-skills UK shows the proportion of women working in technology roles in the UK has more than halved since the 1980s despite technology becoming an increasingly integral part of our everyday lives.

Zoe, who is studying history, maths, economics and product design at A level, beat more than 250 other girls aged 16-18 to the prize.

Each had to answer a quick-fire questionnaire and compile a short essay showing how they have used (or could use) technology to make something happen.

The authors of the top 80 entries were then invited to a networking day at the company's Milton Keynes national centre. Here they took part in group activities where they were observed by the IT team, heard inspiring talks from top business women, and, finally, each had their photo taken in a photo booth, where they held up a card with a suggestion for how they would get more women into IT. ??

Zoe's essay proposed a type of intelligent scanner that would read your schoolbook text and then come up with suggested test questions to help you revise.

Her photo booth message called on the media to get behind IT career opportunities for girls and "stop portraying the industry as being for tech nerds sitting in their basements". ??

>See also: Inside Network Rail's £1 billion IT budget, and CIO Susan Cooklin stands up for women in tech

Cooklin said: "Popular culture has helped create a perception amongst young women that a career in IT is all about writing code in basement offices – the reality couldn't be further from the truth.

“I've been very pleased but not surprised at how engaged and excited about IT all the girls were that attended our networking day. Zoe showed throughout that she had a keen interest and creative mind for solving problems and good communication, and these are the skills that business leaders are after. I'm thrilled to award Zoe with the first prize and look forward to working with her and the runners up on the summer placements." ??

Learning of her win, Zoe said: "I'm so pleased to be the winner and very grateful for the opportunity. It means so much to me, it's really going to motivate me to work hard and do well in my A-levels and I can't describe the confidence this will give me. My aim is to get into one of the top universities and I aspire to be as successful as many of the people I met on the assessment day."??

A survey for Network Rail of 16-24 year old women in Britain revealed that 64% of women have not considered a career in IT, whilst 28% had but were not currently working in the industry.

Negative stereotypes put 10% off pursuing a career with 43% saying it was a lack of technical skill. A further 41% said it was inadequate career advice or little insight into the industry, and 58% believed that a high level of technical expertise in computer programming or code is the most important skill for a successful career in IT.

Only 4% thought good project management skills were the most important and just 7% cited good communication skills as the most valuable.

Between 2008 and 2012, the percentage of women in IT roles at Network Rail grew from 26% to 28%, but only 20% of those applying for the company’s information management graduate scheme were female. ??

Six female Network Rail IT managers devised the ‘Could IT be you’ competition. Only one has a technical subject undergraduate degree – the others studied History, English, Psychology and Philosophy, and Biochemistry and Pharmacology. Three of the women went on to study for the MSc in Project Management devised by Network Rail in partnership with the University of Warwick and University College London.