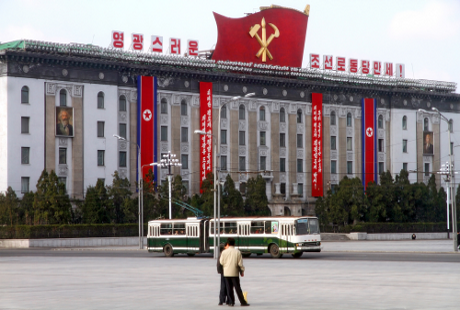 The government of North Korea has accused the US and South Korea of "intensive and persistent" cyber attacks, after Internet service was cut off in the Asian country.

In a statement acquired by NorthKoreaTech blog, state-owned Korean Central News Agency (KCNA) said the "despicable" attacks could not be anything other than the "base acts of hostile forces".

"It is nobody’s secret that the US and South Korean puppet regime are massively bolstering up cyber forces in a bid to intensify the subversive activities and sabotages against the Democratic People's Republic of Korea," the statement read.

Foreigners in North Korea's capital of Pyongyang said Internet access was cut off on Wednesday and Thursday, according to Fox News. According to reports by the Guardian and the BBC, the outage also affected state-run services, including websites belonging to the KCNA, North Korean newspaper Rodong Sinmun and carrier airline Air Koroyo.

The KCNA said the cyber attack was timed to coincide with annual joint military exercises being staged by the US and South Korea.

The accusation reflects growing tensions between the US and North Korea after the communist country launched its third nuclear test last month. The action drew international criticism and the UN security council introduced fresh sanctions against North Korea.

South Korea has accused the North of launching cyber attacks in the past. In 2009, South Korea's National Intelligence Service said that a series of attacks on banks, businesses and government agencies that took place on the 4th of July, America's Independence Day, had been the work of North Korea, or "a pro-North Korean force".

In May 2011, a prosecutor in South Korea claimed that North Korea had conducted a cyber attack that caused an outage at one of the country's major banks that lasted more than a week.

The majority of North Koreans have limited access to the Internet. After recently visiting the country, Google CEO Eric Schmidt said the country's decision to be "virtually isolated" on the web would affect its economic growth.

"There is a supervised Internet and a Korean Intranet. (It appeared supervised in that people were not able to use the internet without someone else watching them)," Schmidt wrote in a Google+ post. "There’s a private intranet that is linked with their universities. Again, it would be easy to connect these networks to the global Internet."

"We made that alternative very, very clear. Once the internet starts in any country, citizens in that country can certainly build on top of it, but the government has to do one thing: open up the Internet first," he added. "They have to make it possible for people to use the Internet, which the government of North Korea has not yet done. It is their choice now, and in my view, it’s time for them to start, or they will remain behind."