North Korea begins production on its own Android-based smartphone 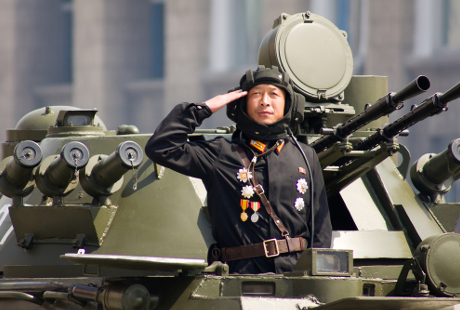 by Pete Swabey13 August 2013
North Korea has begun production of its own Android-based smartphone, official sources have reported.
The news was revealed in a report on a visit by leader Kim Jong Un to the factory where the "Arirang" phone – named after a Korean folk song – is being manufactured.
Kim "learned in detail about the performance, quality and packing of 'Arirang' hand phone being made at this factory," the Korean Central News Agency reported on Sunday.
"He highly appreciated the creative ingenuity and patriotic enthusiasm with which the officials and employees of the factory laid a solid foundation for mass-producing hand phones by building a new modern hand phone production process."
The report claims that the Arirang phone is "high in demand among people", a fact that pleased Kim.
"Looking at the trademark 'Arirang' inscribed on the hand phone, he noted that mass-production of goods with DPRK trademark can instill national pride and self-respect into the Korean people," the report claims.
"He said that only when the quality of products is improved while boosting their production, people will like home-made [i.e. made in North Korea] things and they will be in high demand."
This is not the first time North Korea has developed its own versions of popular technologies.
In 2010, a Russian student at Pyongyang's Kim Il Sung university found that a government-built distribution of the Linux operating system, named Red Star, was being sold at local shops.
When the operating system boots up, users are greeted with a personal message from the late Kim Jong Il describing the importance of technology self-reliance.