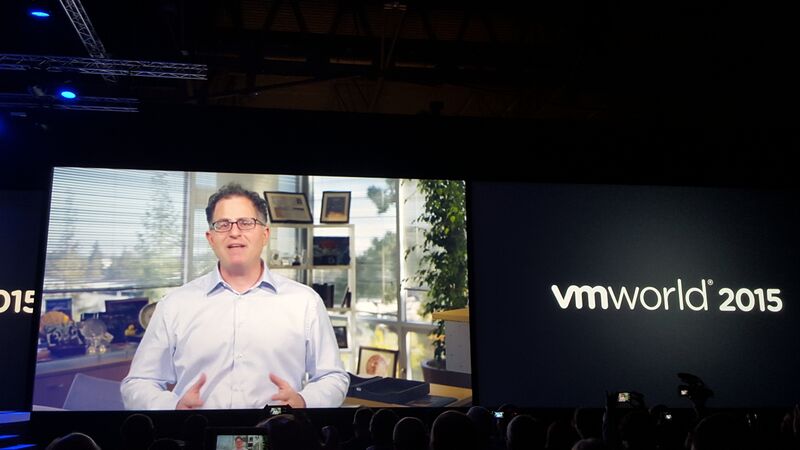 Following the announcement that computer maker Dell will buy up his company in a record-breaking deal, VMware president and COO Carl Eschenbach took to the stage to address over 10,000 customers at the company's European conference in Barcelona today.

Dell has agreed to buy storage firm EMC yesterday for $67 billion – the biggest tech deal yet.

Despite being a quarter of the size of EMC, the bulk of this whopping valuation lies in hypervisor and virtualisation giant VMware, which EMC 80% owns.

'VMware remains a publicly traded entity that will continue to build on its vast ecosystem,' Eschenbach assured customers. 'We're excited about the acquisition as it allows us to expand on our tremenous partnership with Dell for the past 12 years.'

Dell and EMC have partnered for some time to deliver Dell's server and storage platforms integrated with VMware's virtualised environments, so companies can create their own private clouds.

But now Dell has gone all-in on its cloud proposition, moving away from its waning PC business to position itself for growth in the areas of software-defined data centres, converged infrastructure and hybrid cloud in which VMware has built its name.

It is reported that Dell will acquire a huge amount of debt in order to take on EMC and secure its future in software and services, while the onus is on VMware to stay ahead in the market, competing with the likes of Amazon Web Services (AWS) and Google in the world of cloud services.

VMware will likely benefit from a boost to its sales as Dell starts bundling and reselling VMware products instead of those of other vendors.

'It's important to note that VMware will continue to drive innovation through our ecosystem of VMware partners, grow our presence in enterprise as well as leveraging Dell's presence in the SMB and consumer market,' said Eschenbach.

Joining him by videolink was Michael Dell, founder and CEO of Dell to emphasise VMware's importance going forward.

'Sorry I couldn't be there in person today but its been a busy couple of days,' said Dell. 'I couldn't miss the opportunity to say how exicted we all are to unite Dell and EMC…Our combined company will deliver the cutting edge solutions you need to compete in the data economy. VMware leads the way as an amazing source of innovation for a cloud-based connected world.'

VMware's COO went on to refer to the deal as 'complicated' with a lot to be worked out going forward, but said the transaction will close over the next nine months.

Over the last couple of years, VMware has focused on growing its global footprint. Today at VMworld in Barcelona the company underlined its approach to opening up its platform up to an ecosystem of third party service providers.

The theme of today's announcements focused on VMware's 'one cloud' strategy, which aims to deliver an infrastructure to support the next generation of 'cloud native' apps blended together with on-premise, legacy apps, from any device.

As part of the announcements, VMware introduced new updates to VMware vCloud Air and VMware vCloud Air Network, its ecosystem of over 4,000 service providers in more than 100 countries offering VMware-based cloud services.

With this support, VMware will enable IT teams to take advantage of their existing investments in VMware infrastructure tools, while giving developers the ability to leverage a variety of different container orchestration solutions from VMware's ecosystem partners.

The approach is similar to Google Cloud Foundry, which is designed to give enterprise developers the tools to build next-generation applications for deployment on multi-server cloud architecture.

However, Eschenbach went on to say that the Photon platform 'will be full complimentary of Foundry', offering them as a unified bundle.

'People are going all-in when they build unified hybrid clouds,' he said. 'We are not focused on building big multi-tenant clouds with a one way journey or destination to the cloud. We have over 50 million virtual machines on-premise with our customers, and they have long enjoyed enterprise class scalability, security and reliability.

'So if they decide to join public cloud, we can do this for them without changing their underlying architecture. In that way we're not direct competitors with AWS – we are are focused on enterprise class customers looking to scale environments running both on and off premise.'

VMware can't do this on its own, however, he added. 'One of most successful things we are doing is partners leveraging VMware underneath. It's a slightly different strategy, and we clearly differentiate ourselves because nobody else can do hybridity like we can.'