Now’s the time to be a tech start-up, says Sir Terry Matthews 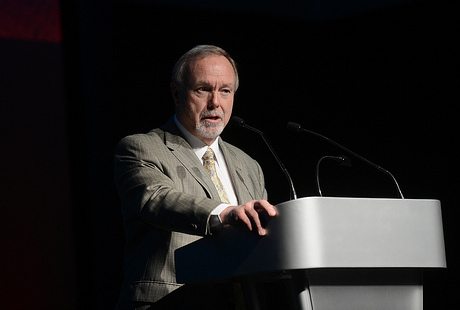 Since then, he has founded 93 companies, just 6 of which have been flops. And in 2000, he sold one of his companies – Newbridge Networks – for $7.1 billion, making him the first Welsh-born billionaire.

So it is fair to say he knows a thing or two about technology entrepreneurship. And according to Matthews, there has never been a better time to be a technology start-up.

"There are more opportunities now than I've ever seen in my career ," he told Information Age at the Digital 2013 conference this week. (The event took place in the hotel that Matthews built on the site where he was born, near Newport, Wales).

One source of opportunity is technological disruption. "Mobile, broadband, big data and cloud computing are all foundational technology changes," he says. "It's when these changes occur that a small company can grasp the opportunity.

"Big companies have got baggage; they need to protect their revenues, and they don't want to do anything low cost unless they have to. So if a smaller company comes along with a razor-sharp focus on a customer need, then boom, they can hit it right away."

The opportunity for start-ups is to take those foundational technologies and look at how they will impact vertical industries such as healthcare, or manufacturing.

Secondly, the economic factors that decimated British industry in the last fifty years are beginning to swing back in our direction, he says.

"The fatal error of the 1960s and 1970s was that we forgot that world trade is a two-way tariff," he says. "It only takes one company to make their products in China or India, and all their competitors have no option to do that too."

"But conditions are changing," he says. "The top engineers and managers in China are no longer earning one twentieth as here – it's about a third or a quarter now. Salaries are increasing at around 15% to 20% a year, which means they will double in the next five years."

"So there's a ten year period when things will begin to stabilise."

Furthermore, while companies in China and India may have a cost advantage, the West is still the biggest market. "You are right against the clients here."

Thirdly, high unemployment means there are plenty of talented young people looking for things to do. This, Matthews says, is how he made his fortune.

"I started with Mitel with $4,000, which is not enough to pay one person's salary," he says. "So how do you turn it into a successful company? You hire new graduates who earn almost nothing but you give them ownership [of the company]."

With no family or mortgage to worry about, these young graduates are prepared to work phenomenally hard – as long as they have a vested interest in the success of the company. "At Mitel, we had our first product after just six months, because we worked seven days a week."

However, young graduates cannot go it alone, Matthews says. They need the benefit of mentorship from more experienced professionals – which, again, the UK has in abundance. "People who are 60 to 65 are actually pretty healthy," he says. "They can either retire, and sit at home twiddling their thumbs, or they can find a young company to help."

Matthews commends the UK government's policy of offering tax credits for angel investors who use their own wealth to fund early stage start-ups. "It's pulling people who are retired or semi-retired back into the workforce to guide the young people, who have tons of energy."