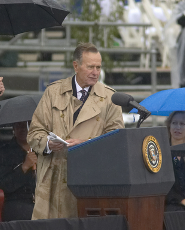 A hacker has stolen personal emails and pictures from former US president George HW Bush and published them online, according to a report by crime news website The Smoking Gun.

The report claims that the files included nude self portraits that Bush sent to his sister. Also stolen were emails to and from other members of the Bush family and a "confidential" list of contacts, it says.

The uploaded content also included photos of Bush with Bill Clinton and clothes designer Ralph Lauren, and of his son George W Bush posing next to a cardboard cutout with his face attached to it.

It is not yet clear how the hacker, known as "Guccifer", obtained the files. A spokesman for George HW Bush told The Houston Chronicle that a criminal investigation has been launched but declined to comment further.

The Smoking Gun, which says it was tipped off by the hacker themselves, says they had indicated that six separate email accounts, including those owned by the former president's daughter, sister and sister-in-law, had been compromised.