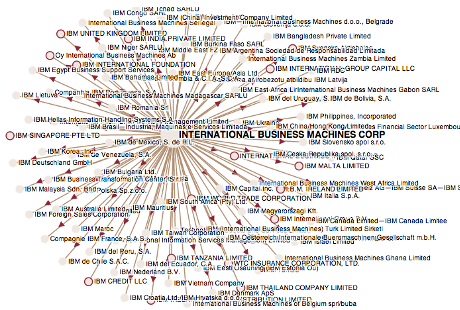 Open data company OpenCorporates has launched a new tool that visualises the corporate structure of some of the world's largest businesses.

The corporate network diagram tool reveals the complex structure of interconnected subsidiaries owned by 2.5 million corporations including IBM (pictured above), Starbucks and Barclays. OpenCorporates has also built an online map that shows the subsidiary structure of the six largest US banks.

Both systems were built using open government data, including filings with the US Securities and Exchange Commission (SEC), company information from the US Federal Reserve bank, and New Zealand's official corporate registry.

"It's the holy grail of business information," Taggart told Information Age. "There are so many different people that need this."

Taggart hopes that making the divisional structure of global corporations easily visible will discourage questionable behaviour, such as registering subsidiaries in tax havens.

“It allows companies that want to be transparent, that don’t make heavy use of tax havens for example, to be able to do so, providing positive incentives for corporate transparency,” he said. “This in turn puts pressure on their competitors to show they have nothing to hide.

"It will take a few years but I think this will start to become the norm."

The network diagram tool currently covers just 5% of the 50 million companies listed on OpenCorporates, but more will be added in future. The company also plans to add crowdsourcing features that will allow users to upload extra data such as company reports.

Taggart says that building these tools would have been impractical without open government data.

"We are using data to do things that would be expensive, problematic or even impossible otherwise," he said. "But through open data it becomes orders of magnitude cheaper and higher quality.”

Based at the Open Data Institute in London, OpenCorporates was launched in 2010 as a way to bring together data in a usable format from government websites, company, registers, official filings and data released under the Freedom of Information Act.

Its ultimate aim is to become an open license database of information on every company in the world.

"As a result of the UK government’s open data policy we were looking at government spending data, and thought it would be great if when matching government data to companies we had a complete list of those companies,” Taggart says. “This grew from three million companies in three countries to the biggest public database of companies in the world.”