It was reported by Reuters last night that global Fintech Paypal offered to buy digital pinboard site Pinterest for $45 billion, which if agreed to would be the largest ever acquisition of a social media company, surpassing Microsoft‘s $26.2 billion acquisition of LinkedIn in 2016.

The bid from PayPal, which sent shares in Pinterest up by over 10% and led to suspensions in trading, follows the trend of consumers increasingly purchasing items they see advertised on social media, with the use of influencers being common.

One source close to the talks stated that PayPal has offered $70 per share, mostly in stock, with the online payments provider hoping to successfully negotiate and announce a deal by its scheduled quarterly earnings announcement on the 8th November.

“PayPal’s bid for Pinterest has the potential to disrupt the e-commerce world and this tie up could see PayPal transform its business model into an ecommerce platform,” said Justin Biddle, UK Lead at Shopware.

“PayPal sees a lot of potential in Pinterest’s model, which has 454 million monthly active users worldwide – meaning PayPal values each user at $100 – this is pretty extraordinary, as conversion rates to traditional wallet/financial products would traditionally be seen as pretty low.

“E-commerce has been looking at how to tie up content and commerce for well over a decade, and Pinterest is one of the few mass market platforms that would still be available for a ‘transaction’ company like PayPal to acquire.” 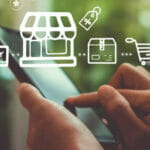 From affiliation to transactions

Biddle went on to express belief that such a deal, if completed, would transform Pinterest’s relationship with the e-commerce space from that of an affiliate agreement, to one that places more emphasis on transactions and increased engagement with consumers.

He continued: “Pinterest’s strength is that it has always been at the ‘curator’ end – its flexible model is used first and foremost to inspire consumers who can then go on to make purchases.

“This is essentially what most retailers are trying to be these days, so it makes sense for it to evolve to be the whole package, especially with a transaction engine like PayPal behind it.

“Pinterest has built a strong community of users on its platform and allowed those who want to simply be curators to thrive. It’s therefore important that this is not lost if an acquisition goes ahead and is developed into an e-commerce platform, allowing both e-commerce professionals and curators to collaborate and exist in harmony.”