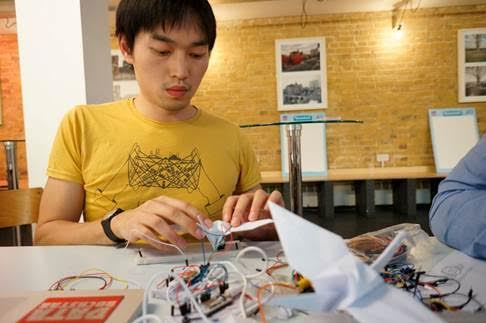 The event took place as part of the annual Talking Peace Festival at Google Campus in Tech City, east London

The theme for this years event was an initiative championed by peace building charity International Alert, which brings together technologists, designers, developers and peace building experts to create solutions for ending violent conflict and building peace.

Peacehack 2016 was effectively a hackathon that targeted hate speech, with a particular focus on the Islamophobia faced by Muslims in the UK and beyond.

The goal for this event was to use come up with ideas using technology to tackle online hate speech and deal with discrimination, both locally and internationally.

Previously ‘competitors’ have innovated some interesting technologies. Safegees, for example is a mobile and web app that allows refugees to privately and securely find friends and nearby NGO-approved safe points.

This is the third year the charity is running the Peacehacks initiative.

Dan Marsh, International Alert’s head of technology, said many participants use real-life experiences of people affected by violence and conflict as the inspiration for their projects, often wanting to prevent the same experiences from happening to other people.

Marsh commented that “Peacehacks are a way for people who are interested in technology to come together and find solutions that can make a real difference. For this year’s hacks, we’ll be exploring creative ways to tackle hate speech – a challenge facing both the UK and other countries around the world.”

>See also: Why London is leading the European wearables industry

Dr Black said that events like these clearly demonstrate “that technology can be harnessed to make a positive difference in the world, improving the lives of those who are vulnerable to harassment, isolation and bullying”.