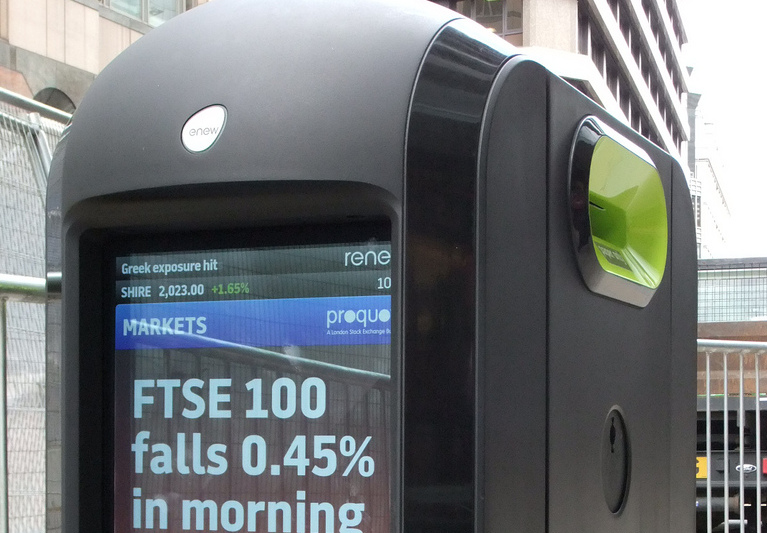 A company that has been trialling "smart" bins that track the mobile phones of passers-by in London has been asked to stop by the authorities.

Renew operates 200 dustbins in the City of London that carry digital advertising, as well as news, travel and financial updates.

In June, it announced that it had beta tested a new service, called Renew Orb. It installed technology, from UK start-up Presense Orb, in 12 locations that detects nearby smartphones and collects data including the make of device and the MAC address.

The idea is that the system allows Renew both to monitor footfall near its smart dustbins and to give its advertisers an indication of the demographics of the people that see their ads.

"The technology enables clients to accumulate data readings that will aid in compounding statistical analysis on trending demographics in high profile locations," the company said at the time.

"With the Renew ORB technology, we will cookie the street," said Renew CEO Kaveh Memari.

The company ran its first trial ran for four days in May, during which time it logged 330,000 devices. In June, it tested the technology for a week and logged around 4 million devices.

Last week, US website Quartz ran a story on the trial, entitled "This recycling bin is following you". The article was equivocal, but it triggered something of a privacy backlash, with Big Brother Watch describing it as "a blatant attack on people's privacy".

Earlier today, the BBC reported that the City of London has asked the company to stop trialling the technology. The Information Commissioner's Office has said that it is looking to see if the service broke the law.

In a statement today, Memari said the Renew Orb service has been misunderstood. "I’m afraid that in the interest of a good headline and story there has been an emphasis on style over substance that makes our technology trial slightly more interesting than it is.

"The process is very much like a website: you can tell how many hits you have had and how many repeat visitors, but we cannot tell who, or anything personal about any of the visitors on the website," he said.

He said that any further use of the system will "not just depend on technology, but also, most importantly, on people being comfortable with interactive technology – much as has happened over the course of the weekend on the Internet".

Renew is the latest company to find that many people are be highly sensitive to the prospect of their mobile phone data – and therefore their location – being tracked by businesses.

In May, EE and Ipsos MORI found themselves on the front page of the Sunday Times after announcing a partnership that would allow the market researcher to aggregate EE's anonymised customer data and sell on its analysis to third parties. The newspaper compared the service to the hugely unpopular "Snooper's Charter".

Other companies have not been met with as much of a backlash, though. Months before EE and Ipsos MORI's announcement, Telefónica Digital had announced a new "SmartSteps" service, which allows retailers to use anonymised and aggregated data from O2's customers as a footfall tracker in their stores.

According to Steven Bartholomew, Telefónica Digital's head of communications, the reason why it did not suffer the same backlash is that the company has actively tried to build public trust in data analytics.

As well as clearing the SmartSteps service with academics and the ICO in advance, it is funding data analytics competitions and joining the Open Data Institute as a commerical partner, he said.

David Sear, CEO of m-commerce venture Weve, made similar remarks as he discussed the implications of the “Internet of things". Sear stressed the need for marketers to build a “relationship of trust” with consumers as marketers find opportunities for this kind of interactive technologies.