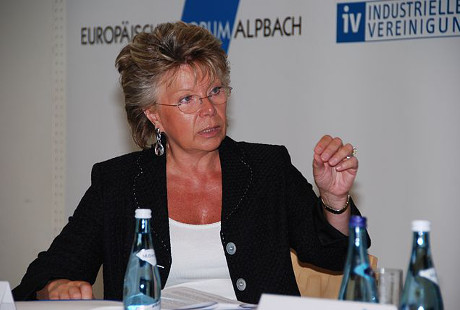 Privacy is not antagonistic to the digital economy in Europe, EU justice commissioner Viviane Reding has insisted in an open letter to the UK's Lord Chancellor.

Reding made her remarks in response to a letter from Chris Grayling MP, in which he expressed concerns that the EU's proposed data protection reforms "could damage business growth and employment prospects, and could leave the EU uncompetitive in the global digital economy for years to come".

"That goes against what should be our underlying priorities at the moment and will not serve the citizens of EU countries well," Grayling wrote.

In her response, Reding argued that improving privacy protection will improve trust in the digital economy, and therefore lead to growth.

"Privacy and competitiveness should not be presented as antagonistic objectives," she wrote. "On the contrary, modernised data protection rules are a crucial market opener in our digital economy."

"We are … encouraging innovation by introducing tools, such as "privacy by design " or data portability, which will give companies the right incentives to gain a competitive edge in digital marketplaces where privacy does increasingly matter for consumers," Reding wrote.

Grayling has also forwarded a letter from the UK's Information Commissioner, Christopher Graham, who expressed concerns that the ICO could not afford to enforce the new regulation without further funding.

Graham wrote that one of the proposals – to remove the need for businesses to notify the data protection watchdog of what they do – would take away one of its sources of funding. "We do not yet know how this funding is going to be replaced or how alternative sources of income would avoid compromising the ICO's necessary 'complete independence'.

Reding replied that for the UK government to simultaneously complain that the new rules would be place an unfair burden on businesses, and that they would remove funding for the ICO, was "half-hearted".

"On the one hand you fear that the proposal will render the EU economy uncompetitive by creating costs for business. On the other hand, you appear to endorse the ICO's request not to do away with the existing costly notification system."

The data protection reforms have been the subject of increasingly public dispute. German MEP Jan Albrecht, who is the lead co-ordinator for the reform project, recently accused colleagues of bending to pressure from lobbyists to weaken the reforms.