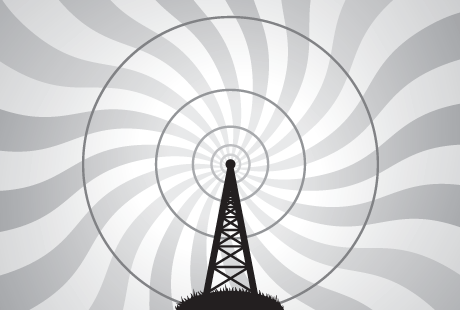 In the era of mobile technology, radio frequency spectrum is a hot property. In February 2013, the UK government raised £2.3 billion by auctioning frequency bands for 4G mobile networking services – a fair sum, albeit £1.2 billion short of the target.

Elsewhere, though, technologists are finding ways to use unlicensed bands of the radio spectrum. One rich seam of this unlicensed radio frequency is known as ‘white space’. In the days of analogue TV broadcasts, bands of radio frequency between the channels were kept clear to prevent interference.

Now that the analogue broadcasts are being switched off, those frequency bands are – technically speaking – available for anyone who wants to use them.

These bands occur at very low frequencies – in the 470Mhz to 790MHz range. This means that they can be used to transmit data for long distances at very low power.

This has a number of possible applications. One of the most eagerly anticipated uses is providing wireless broadband coverage in rural areas.

This was put to the test in a trial run on the Isle of Bute, off the coast of Scotland, which ran from April 2011 to September last year. The trial was conducted by the University of Strathclyde, the UK Technology Strategy Board and a consortium of commercial providers that included BT.

A mast connected to BT’s backhaul was erected on the island, and custom access points were installed at eight properties. “There are no commercial [white space] products in place yet so we modified a Wi-Fi router," explains David Crawford, manager at the University of Strathclyde's Centre for White Space Communications.

The wireless network was put to the test by downloading large files and watching the BBC’s iPlayer video-streaming service at the same time.

The trial, Crawford says, was “definitely a success”.

“It proved the technical viability of using white space devices to provide broadband, which was the main thing,” he explains. “It also provided very useful insight into how white space transmissions and television transmissions can coexist with each other.”

Another trial put white space to the test in an urban setting. In Cambridge city centre, four pubs and a theatre were given wireless broadband access through a system of base stations and rooftop antennas, all linked together using white space spectrum.

The Cambridge project, which was backed by Microsoft, Nokia, BT and others, exploited the technology’s ability to support location-based services. At the Imperial War Museum Duxford, also in Cambridgeshire, visitors could use their mobile devices to access content relevant to wherever they were in the building.

“We also looked at providing content around a venue, such as a theatre, to broadcast trailers to whet people's appetite for what they might be able to get tickets for,” says Andrew Stirling, director of the trial.

Further afield, Microsoft has investigated the viability of solar-powered white space communications in Kenya, where 80% of the population has no access to reliable electricity, let alone an Internet connection.

"We're very much focused on trying to address the digital divide challenges that Kenya faces," says Paul Garnet, director of technology policy at Microsoft. "We're deploying white space networks that are solar powered and are going to be delivering access to areas of the country that don't currently have broadband, such as schools, healthcare clinics, government offices and directly to customers."

Another potential application for white space networks is in machine-to-machine communications. Because low-frequency broadcast requires low power, white space is ideal for connecting devices and sensors with small, long-lasting batteries.

In fact, according to William Webb, CTO of white space technology start-up Neul, a single battery could power white space communications on a device for ten years or more.

This, Webb says, could be used in applications from Internet-connected dustbins to pregnancy test kits that upload their reading for further analysis.

In February 2013, Cambridge-based Neul unveiled a new transceiver chip based on the Weightless white space communications standard. According to Webb, the chip is a vital first step towards widespread use of white space in M2M communications.

“It couldn’t get off the ground until there was a chip out there that only cost a few dollars," he says. "That's now happened, and it's such an important milestone because people can see it's really happening. It's not vapourware or paper produced by a standards body; this chip works and it proves the concept."

The potential market for M2M communications, Webb adds, could be huge. “M2M will be a bit like Apple's App Store, in that once the world starts getting inventive, it's going to go ballistic," he predicts.

Naturally, white space is not without its complications. Once the now-unused spectrum is in heavy use, there will need to be a mechanism to ensure that two or more white space devices do not use the same frequency and therefore interfere with one another’s signal.

"White space may be licence-exempt, but it's not going to be a free-for-all," explains the University of Strathclyde's David Crawford.

In the UK, communications watchdog Ofcom has opted for the same approach as the US’s FCC. Commercial providers will be able to operate databases of white space usage and radio frequency licensing; devices will consult these databases in real time before choosing which frequency to broadcast on.

Ofcom is currently in the process of approving database providers. According to Crawford, it needs to ensure that there is no possibility of devices ‘spoofing’ their location to use spectrum that is either licensed or occupied.

"If people know there's lots of white space available in a location, they could program a device to tell the database it's there, rather than its actual place where there isn't any [spectrum available]," he says.

Finding the right regulatory framework for these databases is the final piece in the white space puzzle, says Microsoft’s Paul Garnett. "Once Ofcom has the regulations in place and allows databases to operate, it's just a matter of time before devices proliferate,” he says.

According to Neul’s Webb, the first commercial uses of white space for M2M may appear before the year is out.

"I realistically think we will see M2M devices using white space technology in nine months to a year," he says. "And we could see them in the UK and US first, as that's where the regulation that allows TV white space to be used is most advanced."