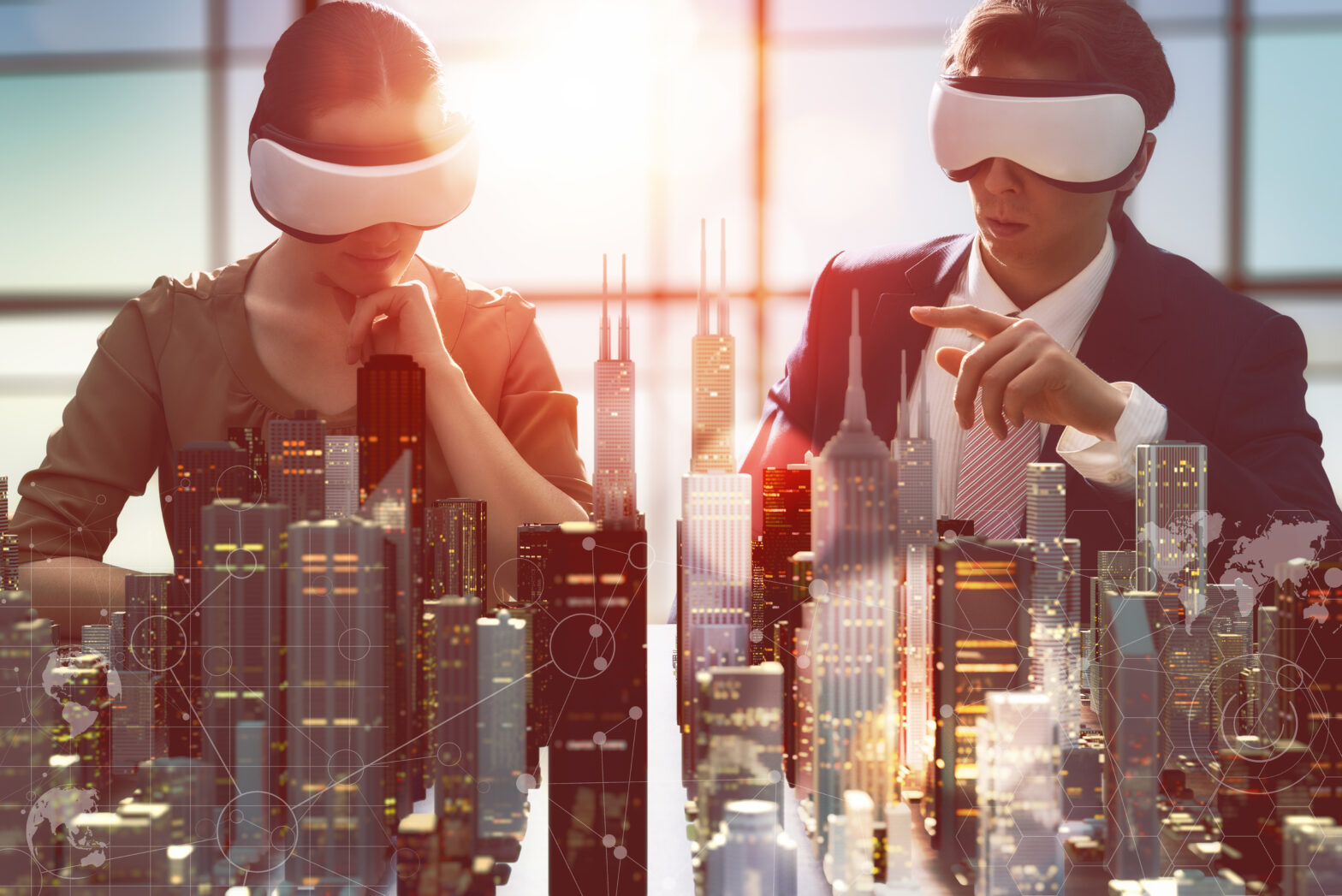 New technologies, it seems, are constantly disrupting organisations across a range of industries. Virtual reality and augmented/mixed reality (VR and AR) are two such technologies.

2017 will see a surge in their adoption amongst enterprises. Already it is being used for virtual tours, 360 ̊ views of products and employee training.

VR and AR, at the very least, offer businesses a chance to host more convincing presentations in an immersive, content-filled way and are a cost-effective method of developing a product or service.

For example, the UK’s retail market could be boosted by as much as £1 billion a year if retailers invested in technology that allowed consumers to virtually place products in their own homes before committing to costly purchases, research from DigitalBridge has revealed.

AR and VR technologies give businesses an opportunity to build, sell and analyse virtually, rather than physically. It removes the obstacle of location, cost and communication.

As customers expect more and the idea of the remote worker intensifies, this relatively new tech will be crucial in evolving enterprise operations. They will be necessary to help businesses innovate and remain competitive in an ‘uberfied’ world.

The use of VR/AR allows for unprecedented access to information. ‘3D visualisation is one of the only ways that non-analysts can enter, navigate and understand complex data,’ suggests Stimson.

Utilising the technology will increase efficiency and adaptability. ‘VR allows leaders to immerse themselves in data without needing to see a single digit, saving considerable amounts of time,’ continues Stimson. ‘It also allows them to dynamically model big data against theoretical future scenarios and watch the outcomes change around them.’

The third advantage, which has been touched upon, is the power of persuasion. ‘People are more likely to engage with something 3D, interactive and that appears physical, rather than black-and-white digits on a page,’ concludes Stimson.

Google, Microsoft, HTC, Sony and Samsung all recognise this potential and have been making huge commitments to invest in this tech. Meanwhile, Facebook stated its intent when it paid $2 billion for Oculus Rift in 2014 (this month a US court ruled that Facebook had to pay £395 million after finding that it had unlawfully used a firm’s virtual reality technology in Oculus – this will be appealed).

It is clear that the advantages VR and AR technologies present are vast and integral to enterprises’ broader digital transformation. As a result, the speed and intensity with which they are heading for the enterprise is accelerating.

To cope with the increasing demands for digital transformation, networks will have to evolve. At the moment they are not ready. This required transformation of the enterprise network is all about connectivity. The strength of enterprise connectivity will define new technology’s impact within the business environment, and will ultimately determine success or failure, survival or extinction.

The incoming flurry of these transformative tools requires a next-generation network, and this will rely, in part, upon the successful implementation of national internet infrastructure.

In the UK, chancellor of the exchequer Philip Hammond announced plans in his first Autumn Statement to invest heavily in broadband and 5G network capabilities. But will this be enough?

This piece also examines the challenges of upgrading the enterprise network in line with VR/AR.

High-bandwidth networks producing immense connectivity are going to be fundamental to the success of businesses looking to transition new technologies into their operations, as part of an overall digital transformation strategy.

These are typically referred to as next-generation networks, which technically are defined as packet-based networks that can be used for both telephony and data, while supporting mobility.

Current internet infrastructures simply do not have the capability to support the required connectivity. Current networks are supplied with long lead-time, fixed bandwidth and expensive long-term contracts.

This, according to Nigel Tromans, product manager at Colt Technology Services, is the polar opposite to what enterprises moving forward need.

What is required, suggests Tromans, is a ‘liquid infrastructure’ – a network that can scale and be provisioned in minutes rather than days, or even weeks. For this, the network is critically important, and businesses cannot afford to underestimate this.

He continues, ‘As enterprise computing moves to the cloud, the demand for bandwidth capacity is exponential and, being aggregated, it is increasing in the network core faster than anywhere else.’

As more devices using AR and VR are added to a network it grows in complexity, and with this, more and more data will inevitably be produced.

Cisco estimates in its yearly report that traffic between data centres is increasing by 29% year-on-year.

The required internet infrastructure for major enterprises (as well as cloud providers and service providers) will need to act as a responsive, high-
performance backbone of the networks that connects different business locations, such as the data centres.

To achieve this, serious investment, planning and decisive action is needed.

To circumnavigate the added complexity to the enterprise network, 5G and fibre-optic broadband infrastructure must be built to support the influx of data. The success of next-generation networks depends on it.

Peter Nas, senior solutions architect at F5 Networks, agrees and suggests that the speed at which VR (and other technologies) is advancing means 5G will have to become a reality. He says, ‘Experts predict that the UK could see its first 5G network as soon as 2020. The differences we will notice are not just the faster internet speeds and greater bandwidth, but the reduction in latency, which has somewhat limited the mainstream adoption of developing technologies like VR.’

According to a report from Global Market Insights, the adoption of 5G is set to soar in the next seven years, largely due to the surging adoption of internet-enabled devices connected throughout the world by the Internet of Things (IoT).

5G technology growth will be due to the rising high-speed and large network demands of various industry applications such as VR, autonomous driving, distant learning, video conferencing, telemedicine and augmented reality.

In turn, 5G will also be necessary to facilitate the foundational infrastructure for smart city development by enhancing mobile network performance capabilities. The projected growth of 5G comes down to the fact that it provides very high bandwidth for mobiles and advanced features for various smart devices.

This must not be rushed, however, and Nas warns, ‘There is a great deal of testing that needs to be done in preparation for networks to roll out 5G.

But businesses also need to be prepared for the impact it will have on their business and customers’.

To achieve this capability, Hammond in his Autumn Statement committed £740 million to the development of 5G and full-fibre connections. There will be no launch date made available for the 5G service, but Hammond made clear the need for ‘fibre-to-the-property’ broadband, rather than fibre to the roadside cabinet.

This move to trial superfast 5G mobile networks ‘is a positive step forward that could help accelerate the commercialisation of next-generation mobile technology in the UK’, says Dr Li-Ke Huang, research and technology director at Cobham Wireless.

In order to achieve 5G networks to cope with the increasing data minefield within the enterprise network, the quality of fibre-optic broadband infrastructure must be upgraded. Only 2% of the UK has access to full-fibre broadband, offering download speeds of up to 1 Gbps, according to government figures.

‘For the UK’s digital economy to benefit from the technology, it will require innovations and breakthroughs – not only in the traditional wireless technology domain, but also in the overall system design methods and principles used,’ says Huang.

In the meantime, BT chairman Sir Mike Rake says the firm has developed an interim technology to get more full-fibre broadband to the property.

‘We are committed to getting fibre to the premise ultimately, which is the long-term game, because it’s much more reliable,’ he told BBC Radio 4’s

Today programme. Until 5G and full-fibre connections are implemented BT will ‘substantially enhance’ speeds for 95% of the country, he said. There are sceptics aplenty, however, citing concerns over the amount of investment required for the government to fulfil its promise.

The Autumn Statement’s proposal in terms of the emphasis on improving connectivity highlights a change of attitude from the UK government.

The move to integrating ‘the new gold standard full-fibre broadband’ directly into businesses is an acknowledgement that the UK is falling behind countries like South Korea, Japan and Singapore. Good, powerful and resilient enterprise networks will be enabled by strong connectivity infrastructure.

It will be absolutely crucial moving forward. It will define the success of enterprises looking to embrace a digital revolution.

The next stage of the UK’s internet infrastructure is in its infancy and the road is long, but it is entirely necessary to support the next-generation networks that enterprises will become wholly reliant on as they begin to adopt technologies like virtual reality.

Funding, commitment and practicality are just a few of the obstacles facing internet infrastructure’s development. Further challenges lie ahead – specifically, the challenge of integrating VR into enterprise networks.

In a scenario where a rejuvenated internet infrastructure supported the connectivity necessary for the enterprise network’s uptake of VR technology, another challenge would arise – hardware.

‘Currently, the equipment needed to integrate VR into a business can be fairly costly,’ says Matt Hunt, CEO of Apadmi Enterprise. ‘So far, a lack of hardware availability on the consumer side, as well as the enterprise side in fact, has limited the uptake of VR technology. As more advanced devices and software are developed, this should change and should make VR more accessible to all.  To encourage greater adoption in the business space, the trick for innovators is to find ways in which VR can help to generate more revenue, but at a lower cost than current tech.’

‘The vast amount of data gathered through the technology can lead to a myriad of security concerns. Businesses must therefore factor in the technology’s potential for immense harvesting and analysis of highly personal, sensitive information when planning their cyber security strategy.’

>See also: Enterprise networks are proving to be blockers to digital transformation

Employees used to using VR in their personal life may not have any qualms about using it in a business environment. Yet the task of protecting the corporate data streaming through will eventually fall to the IT department. And this ‘corporate data’ is, in reality, often customers’ personal data used within the VR/MR context.

As companies look to invest in new ways to engage with their customers, they will collect more and more data – and their responsibility to protect it increases exponentially.

‘Most employees don’t really care about the security of corporate data,’ says Mount. ‘They are usually more focused on finding ways to get the job done efficiently. However, as cyber criminals grow more sophisticated, and look to target potential vulnerabilities within enterprise VR technology, staff will continue to be a target.’

Virtual reality is going to become more mainstream in both commercial and enterprise spheres within the next 12 months. ‘As VR embeds itself deeper into the enterprise sector, businesses will see the channels they use to interact with customers and colleagues change,’ says Hunt. The full potential of this will only be realised once internet infrastructures are updated to support 5G networks.

In a converse closing thought, David Levine, CEO of Manchester-based technology company DigitalBridge, suggests that AR, rather than VR (which he sees as an enterprise ‘add on’) is set to have a greater impact on enterprise operations ‘because it can be implemented seamlessly within mobile systems’.