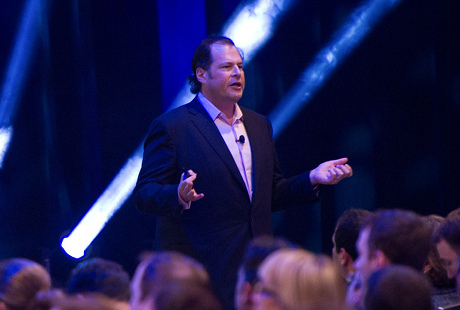 The company's rapid growth showed no sign of abating – for the year, Salesforce.com's revenue grew 35% to $3.1 billion. But operating costs grew faster, up 38% to $2.5 billion.

As usual, Salesforce.com executives paid little attention to the company's losses on a typically upbeat conference call with investment analysts.

CFO Graham Smith did say that the company's operating margin (operating profit as a percentage of sales) had fallen year-on-year due to the acquisition of social media marketing software vendor Buddy Media, "where we are investing significantly for future growth". In October, Salesforce.com announced 100 job cuts in its marketing software division.

Salesforce.com increased its revenue projection for 2013. "I am absolutely delighted to announce that we are raising again our full fiscal 2014 revenue guidance which we now project at $3.82 billion to $3.87 billion," said CEO Marc Benioff on the analyst call. "This puts us on pace to reach a $4 billion annual revenue run rate.

"[I'm] very excited about that and [it's] definitely our short term goal on the way to our $10 billion dream," he said.

"Chatter will be the social layer for Unilever's enterprise unifying more than 80,000 employees around the world," Benioff said.

He also spoke about Dutch electronics giant Philips, which Benioff said using its CRM, service desk and social collaboration software "to connect millions of products onto a single customer network".

"From toothbrushes and coffeemakers, to new LED lighting products, all of them are going to be connected through Salesforce and our customer platform," Benioff said.

"I am looking forward to the connected toothbrush," he added.

Salesforce,com is clearly a highly successful company, and growing at such a rapid rate of course costs money. But the fact that a company that presents itself as the future of the IT industry is so consistently loss making cannot be ignored.

Earlier this week, Information Age spoke to TechMarkView analyst Angela Eager on the cloud computing sector in the UK.

"The profitability of cloud companies is the elephant in the room," she said.