The Salvation Army’s mission to connect its UK territory 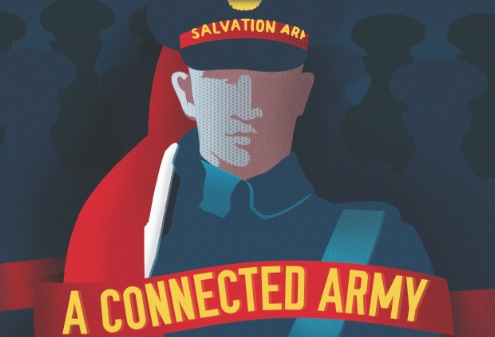 The Salvation Army is one of the oldest and largest charities in the world. Also a Christian denominational church, the organisation boasts over 1.5 million members around the world.

Its charity shops, homeless shelters and centres for disaster relief and humanitarian aid stretch across 126 countries, but London is both its birthplace and home.

With 7,000 direct employees in the UK, including 5,500 users of IT, and only 25 in the IT team, CIO Martyn Croft has a big job on his hands – particularly considering that the Army, unlike other charities, is not afraid to invest in technology. ‘That’s a great thing at Salvation Army,’ says Croft, who has been with the organisation for 19 years and the UK CIO since 2009.

He believes that if the Army’s notorious founder, William Booth, were still alive today, he’d be a technology whizz. ‘He used a car because it was the fastest way of getting around, whereas other people of the day would shun that and ask, “What is a charity doing investing in technology?”’

Such a philosophy has inspired the charity’s latest initiative to create a ‘connected Army’. Of the 7,000 UK staff, around 1,500 are Salvation Army officers. As ministers of religion, the Salvation Army is their life, and so enabling them to be connected at all times can provide large benefits.

To aid this initiative, Croft and his team have embarked on an extensive WAN (wide area network) project to invest in bandwidth.

It is so extensive, in fact, that the managed service operation will be spread out across all of the Salvation Army’s 1,000 UK locations, which includes 700 churches.

‘We’re working with a company called Redcentric, and they’ve really grasped the idea of what we want to do,’ Croft says. ‘It’s about connecting all those outputs across our locations.

‘The great thing is that we’re using anything and everything. What we wanted was a solution that was essentially supplier-agnostic. We’ve got some locations in pretty far-flung places and we didn’t want to be hampered, as we might have been in the past, trying to get a connection out to somewhere that’s perhaps a bit more off the beaten track.’

Currently halfway through the project, the Army will soon be connecting the churches and ministers’ quarters so that they’re always on.

Laying the foundations for this connected strategy is the Army’s policy for standardised IT, which is centrally managed from its headquarters in Elephant and Castle, central London.

Over the past few years, the Army has migrated to terminal server as a technology platform, and increasingly to Citrix as a virtualised platform, enabling much more infrastructure to be utilised.

‘If you look at some of the IT operations in our homeless centres, which we have around 70 of, traditionally there would have been half a dozen PCs and a server in the back office,’ Croft says. ‘That’s a very expensive overhead for anybody, but especially for a charity.’

Croft and his team saw that moving to a virtualised platform could bring that cost right down and widely extend the lifetime of that technology.

‘That’s a tremendous payback,’ adds Croft, who also highlights the added benefits of support – ‘If you’ve got a problem with it, you stick it in a jiffy back and post it back; we don’t have to send engineers out’ – and security – ‘Data is now safe and sound in our data centre; it’s not out there at risk.’

Following the success of the server virtualisation, the Army is now in the middle of partnering with Citrix again to virtualise all of its desktops, and is also seeking further agility through a mobile strategy.

‘We have a very good arrangement where we provide a range of phones so that people can choose one – so essentially choose your own device (CYOD),’ Croft says. ‘A lot of people just want a simple phone to stick into a glove compartment just in case, while others need the services of a BlackBerry, so we’ve had BlackBerrys hooked into our Lotus Notes infrastructure.’

Expanding on this, the Army has also been eager to introduce its staff to iPads with push-email software IBM Notes Traveler.

‘It’s a great piece of technology, and we’re there early – we’re not waiting for it. People have really enjoyed that, to the extent that they have started to question whether they really need a smartphone if they’ve got an iPad.’

Tools of the trade

However, Croft is now keen to move away from the CYOD policy in favour of a bring-your-own-device (BYOD) strategy, which would further contribute to the philosophy of a connected Army.

‘I feel that we ought to be heading towards an environment, certainly as a charity, where people bring their own technology,’ he says. ‘My analogy is that if you get the plumber to come along and mend your leaking tap, he doesn’t walk in and ask you where your tool kit is – he brings his own.

‘So surely for people working in an information age, shouldn’t we expect them to come equipped with the tools for the job? That’s been an interesting area for us, and it’s been one that, curiously, we’ve had to promote.’

But Croft isn’t too sure about Android for now, instead choosing to evangelise on the use of iPhones and iPads across the organisation while segmenting the network to prepare it for BYOD.

‘That’s been a very successful programme,’ he says. ‘We’ve done that all on our own in our internal team. We sat down and took a back-to-basics look at what the security model was about and how to do that.

‘I wasn’t very keen on introducing the sandboxed environment – I don’t think there’s any point. If people are going to use an iPad, then they should use it to its fullest extent.’

Indeed, Croft is very keen on technology empowering the business, but equally on its ability to provide information to the organisation.

It’s for that reason that he insists on his team being called not the IT department, but rather the ‘strategic information department’.

‘In my book, you can get anybody to put a PC on a desk,’ he says, ‘but it’s what you do with it that’s important.’

With thinking like that, he’ll have an army of valuable information in no time.