78% of UK office workers aren’t scared of automation, according to UiPath 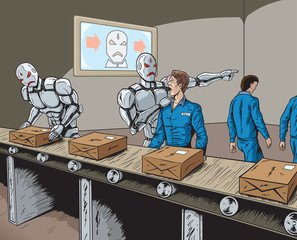 Automation has made huge leaps forward in recent years, while many organisations are still only just dipping their toes in the technology, the very real prospect of bots and drones infiltrating workplaces has come to the fore. A report from the management consulting firm McKinsey & Company recently suggested that half of today’s work activities could be replaced by automation by 2055. PwC’s research was sobering too; predicting that 38% of US jobs could be automated within the next 15 years.

But employees don’t seem to be too worried. According to an independent study undertaken for the Robotic Process Automation (RPA) software firm UiPath, which examined the attitudes of 1,000 office employees to automation, 78% of UK office workers are confident their jobs will survive automation. But the study revealed something else: nearly half (49%) do not see how a software robot can undertake their administrative duties. Furthermore, less than a quarter of UK employees (24%) believe automation will hurt the UK economy.

Despite workers being optimistic about automation, UiPath found that only a third of male office workers (33%) and 22% of female office workers believe the technology will increase their productivity, even though more than six-in-ten across both sexes (61%) spend in excess of 30% of their time on repetitive, routine tasks that are set to be automated.

The RPA market is exploding, RPA or robotic process automation, has moved up the Gartner hype cycle, and it is no longer ‘one day’ technology it is technology that is transforming business now, and UiPath sits in a comfortable position, it claims to be the fastest enterprise software company in history, and we spoke to Guy Kirkwood, its chief evangelist

It all seems to suggest that workers are in the dark about how automation will impact their roles.

“The fourth industrial revolution will create relentless waves of change as we embrace machine learning and robotics,” said Jacqueline de Rojas, CBE, President of TechUK. “This is not going away, and the only thing we can change is our response. Our job will be to figure out how we respond to these changes and to pivot our skills in an ‘evergreen’ way throughout our careers.”

Digging a little bit deeper into the views of UK workers, UiPath’s research found that 37% of respondents would devote more time to new strategic projects if RPA freed them from repetitive tasks, while 36% would like to develop new skills. Almost a quarter (24%) will spend more time collaborating with colleagues, and more than a fifth (22%) on interactions with customers.

“It’s encouraging to see that when office staff understand how RPA can free them from drudgery, they already see more profitable uses for their time,” said Kulpreet Singh, Managing Director EMEA, UiPath. “It is imperative that organisations prepare their employees for the automation revolution.”

He added: “Office employees may be in for a pleasant surprise as the burden of boring and routine tasks moves to being performed by software robots instead.”

How can companies avoid being disrupted: they need to welcome and anticipate change, they must learn to become a disruptor