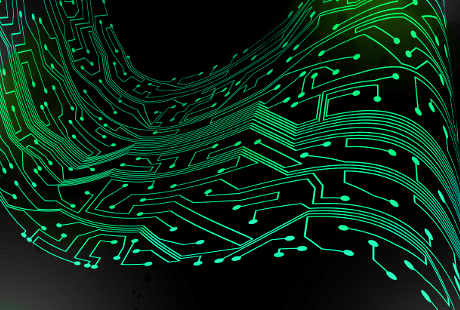 A team from the Royal Melbourne Institute of Technology (RMIT) has brought fully flexible electronic devices one step closer to reality.

Up until now, one of the main obstacles to truly flexible electronic components has been the high processesing temperatures required to create them.

All transistors in electrical devices use thin layers of oxide materials, but these oxide nanolayers are rigid and brittle, and the process of depositing them requires temperatures of over 400 oc.

The silicon foundation upon which these electrically-conductive components sit and which forms the basis for most modern electronics is also brittle and hard.

For electronic devices to be flexible, they would have to be incorporated onto a bendable polymer material, which would be unable to withstand such high temperatures, burning up during the manufacturing process.

Philipp Gutruf, Phd researcher and lead author of the paper published in Nature Publishing Group’s Asia Materials journal, explained how his team has developed a completely new process that overcomes this issue, opening the door to versatile bendable electronic devices.

‘We used a transparent indium tin oxide material for the electrically-conductive components,’ he says.

‘But instead of a rigid oxide layer, which has the same properties of glass and can crack, we created a layer of oxide plates like tectonic plates, that overlap and slide over each other to make a bendable, stretchable surface. They can withstand a huge amount of stress while still retaining their electrical conductivity.’

Gutruf’s team prepared the oxide plates onto a silicon layer, then poured a special rubber-like polymer on top, peeling off the layer once dried to set the components into the material and leaving the silicon behind.

For the polymer layer they used polydimethylsiloxane (PDMS) – an organic, transparent material that is commonly used in medical devices such as breast implants and catheters, as well as in food additives because it is non-toxic and bodycompatible.

Bendable and bodycompatible electronic devices could have many medical uses, because implanted devices that are soft are less likely to be rejected by the body.

The team is collaborating with RMIT medical researchers to develop endoscopy devices ­– cameras used to monitor inside the body instead of scans or x-rays  – that could be left in the body to take data readings over a period of time.

They are also conducting research into piezoelectronics – new kinds of self-powering electronic motors that could potentially be used in medical devices such as pacemakers, eliminating the need for invasive procedures to replace batteries.

But for mobile computing, the research opens up the potential to take flexible device technology to the next stage.

It is used in many devices and TV screens, but only now are we beginning to see the first flexible iterations of displays in the market.

In January device manufacturer Samsung unveiled a prototype line of phones using flexible plastic-based displays under its YOUM brand name, demonstrating paper-like smartphone concepts that could be folded in half like a book.

And this month the company launched its Galaxy Round smartphone ­– the world’s first product to feature a curved OLED display.

But Gutruf believes his team’s research could lead to devices that are significantly more flexible.

Flexible displays in huge demand, but at the moment they’re more bendible than fully flexible,’ he says. ‘Phone concepts demonstrated by Samsung can bend to certain dgeree, but a device made from PDMS using the process we describe could be truly flexible, stretchable and virtually unbreakable. Devices could therefore be much more portable. Interactive newspapers that can be crumpled up like paper in your hand are not that far away.’

The possibilities are expansive, and devices created with PDMS would also be transparent, which could mean transparent TVs, interactive advertisements in shop windows and displays intrgrated into car windshields.

Because the material is organic it is also biodegradeable, potentially creating far less waste than conventional devices.

However Gutruf estimates it may take a ‘decade or two’ before flexible devices are on the same functional level as rigid electronics.

So far the team have demonstrated transferring the key oxide element into a flexible polymer – the next step is to demonstrate to industry collaborators that the process can work with a fully functioning processor.