The second wave of the second machine age 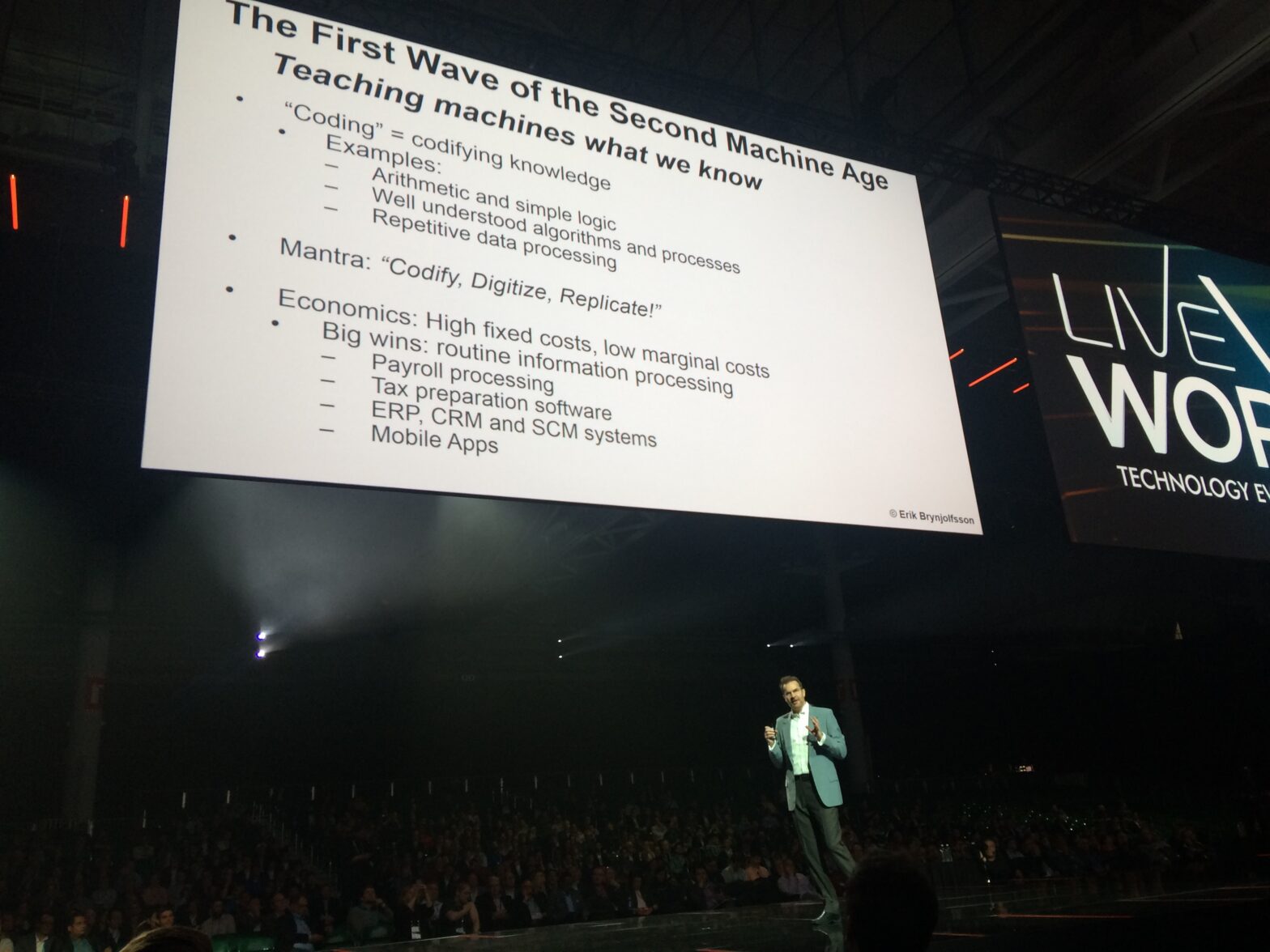 In an incredibly engaging talk at LiveWorx 2017 last month, Eric Brynjolfsson – bestselling author and director at MIT initiative on the digital economy (IDE) and MIT Sloan School – discussed the age of the machine and what impact it will have on society as people know it.

The keynote speech began with an idea of how to change the world. “What you need,” said Brynjolfsson, is a ‘power and control system’. The power system refers to the movement or transformation of things, while the control system decides where and how these things are arranged. Before the industrial revolution (the first wave), humans were this power and control system.

200 years ago that all changed. Humans discovered other ways of manipulating the power and control system. This is most notably exemplified in the creation of the steam engine, which effectively ignited the industrial revolution. After this, machines became the power system.

Now, society is witnessing the process of machines taking over the control system. Indeed, this era heralds the early stages of the machines augmenting the human brain. Does this ability to augment not only the human muscle and brain – human behaviour – pose a problem for humans?

The first wave of the second machine age

The first wave of the second machine age began with scientists teaching machines what people know. Effectively, this entailed information processing via human coding skills, but it was problematic because humans know more than they can tell (Polanyi’s Paradox). This actually limited what machines can do, because of human’s descriptive ineptitude, and ultimately halted the impact of machines on society.

>See also: The age of the intelligent enterprise

The second wave of the second machine age

The second wave, suggested Brynjolfsson, has very profound implications on human society, the economy and what it means to be human. This elevation of machine understanding “could be the most important thing that happens to humanity,” said Brynjolfsson.

Neural nets are an example of supervised machine learning, which looks for patterns humans provide – like cancer scans. In this scenario the machine will keep learning, i.e. the mastering – well beyond any human – of Atari video games, or more recently, Go.

At the moment, this second wave has a number of forms, with many other applications. For example, in vision and language. The possibility of real time translation from one language to another is nearly there. Equally, after introducing neural nets to the 30 year old voice recognition industry, the machine recognised words better than a human with an error rate of just 4.9% after only 10 months.

>See also: The rise and rise of intelligent machines

The impact of the second wave will also increasingly be felt in the physical world. The emergence of autonomous vehicles for mobility will increase dramatically, while practical robots have and will continue to work alongside humans. By 2018, it is estimated there will be 400,000 worldwide industrial robot shipments.

The most profound impact the second wave will have on society, according to Brynjolfsson, is problem solving. Google’s DeepMind applied a neural net to one of its data centres, which optimised its electricity use by significant numbers: something the best scientists in the world failed. The machine came up with a way to reduce the power used in cooling the data centre by 40%, and an overall 15% efficiency reduction in overall power usage effectiveness (PUE) overhead. This could be applied to any other factory.

This second wave of the machine age has clearly had positive impacts on society. GDP per person is at record levels, there is less poverty, but crucially, there is nothing in economic law that says everyone will benefit from this machine-led era.

Technology could make the situation of people’s lives worse. This problem was not encountered during or after the industrial revolution, it was the opposite. However, now the ‘pie’ is certainly bigger, but not as many people are a part of it.

Technology is being used in a way that leaves people behind, suggested Brynjolfsson. There has been an overall change in the share of income, with labour income, specifically, declining.  The problem with digital technology is that once someone digitising a process a replicate is created. This replicate can be copied infinitely. These copies are free, perfect and instant. Now, apply that to a worker’s role in any profession and the problem becomes clear.

The key challenge and responsibility faced by governments and organisations is that the rapid advancements of technology are not being met with the necessary societal adjustments. ‘Skills, organisations and metrics are lagging,’ explained Brynjolfsson.

‘We need to find a way to work with machines to enhance our own value. But we need to change our methods. Tradition won’t work. We need to race with machines, not against them,’ concluded Brynjolfsson.