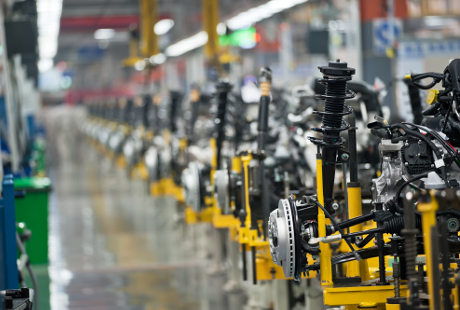 The Ford Motor Company is credited with being the progenitor of modern manufacturing. The company may not have invented the assembly line but it certainly perfected it, and set the template for the way things were made for much of the 20th Century.

Now, of course, vehicle manufacturing is largely automated and highly technical. When the company launches a new product, as much engineering expertise goes into the manufacturing process as the vehicle itself.

Ford has used process modeling software to simulate its manufacturing processes since the 1980s. It uses the software both to simulate an entire new process before a new product is put into production, and to refine existing processes on an ongoing basis.

The purpose is to predict the impact of a process design decision before putting it into practice. Finding out that something doesn't work after the plant has been built can be very expensive to fix, and can delay the launch of new products.

"Getting the process right in the planning stage saves us a great deal of investment after we've installed it," explains John Ladbrook, Ford's European simulation technical expert.

The process modeling software that Ford uses is made by Lanner, a UK company whose roots lie in research done by British Leyland Motors in the late 1970s.

Ladbrook and his team work with Ford's manufacturing engineers to spec out a new process. They compile descriptive data about that process, such as the predicted number of breakdowns for each piece of equipment and the flow of work around the shop floor, into an Excel spreadsheet.

Lanner's Witness application analyses the data and produces a two dimensional visual simulation, allowing the engineers to predict the outcome of the proposed process. This feeds back into the engineering process, and also forms the basis of various management reports.

The use of simulation has seen something of a resurgence at Ford in recent years, Ladbrook says. As the simulations have become more detailed and more reliable, management has grown to trust them more.

"They like the confidence it gives them that we are going to achieve our plan targets, and that its not just a paper calculation, it's based on some real data," he says. "And I think they like that we uncover problems and help come up with resolutions."

"Of course, they also like that it turns into savings."

That support from management means Ladbrook’s simulations team has grown from one or two to 12 over the last five years. “There’s lots of new work going on,” he says. “That’s been driven by the success of our models, which are getting more realistic and more reliable.”

The simulations are not perfect, however, especially when it comes to modelling new processes, Labrook says.

"There is still room for improvement when it comes to modelling new facilities," he explains. "Often, the models are based on historical data that doesn't get repeated, and optimistic predictions for how equipment is going to perform in future."

Ladbrook is therefore always keen to incorporate more and more data into the simulations. “I'm trying to move towards total plant simulations, building in more ancillary information about the tools and materials.”

“We're certainly getting closer but I think there's still a way to go before we can be 100% confident in the model.”