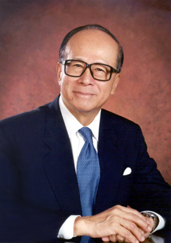 To his fellow Chinese, Li Ka-shing is simply Chiu Yan, or Superman. It is quite a title to live up to. And Li, Asia’s richest and most powerful businessman, is about to find out if he deserves it.

The stakes are so high that, should he pass the test – and he usually does – not only will he reap yet more personal rewards but he will also herald a new boom in Europe’s technology industry. Save for the occasional lapse, Li, the 73-year-old chairman of ports-to-telecommunications conglomerate Hutchison Whampoa, has never looked back since he cut his teeth selling plastic flowers on the streets of Hong Kong in the 1950s.

Like other legendary business people, stories abound of Li. According to one, he always sets his watch eight minutes early. Some say this is because the Cantonese word for ‘eight’ sounds like ‘prosperity’. Others, however, insist it simply means that he likes getting there first. If so, it is a philosophy that translates well into the race to launch third-generation (3G) wireless services. For Li is about to become the first to properly test Europe’s appetite for 3G.

Hutchison 3G, the big-hitting joint venture of Hutchison Whampoa, NTT DoCoMo, Japan’s biggest wireless carrier, and KPN Mobile, the Netherlands’ number-one mobile phone company, is trialling 3G services in the UK and Italy ahead of a pan-European launch in 2003. It is expected to be the first venture to offer commercial 3G services outside Japan. In the coming months, Hutchison Whampoa-backed operators will also launch services in Austria, Denmark, Ireland, Israel and Sweden. Hutchison has also been linked with MobilCom, Germany’s embattled 3G licence-holder, and a 3G licence owned by Sonera in Finland.

To say that large sections of the high-tech industry in Europe and the US are closely watching events at Hutchison would be an under-statement. Of all the causes of the IT industry recession, the huge sums spent on 3G licences in early 2000, and the resulting collapse in telecoms company share prices, is perhaps the most important. Many executives blame the pre-crash 3G hype for the present crisis in the industry. Now 3G has the chance to finally atone for its ‘sins’.

For its part, Hutchison played a remarkable and mysterious role in Europe’s first, trend-setting 3G auction – the UK’s eight-week, £22.5 billion (EU35.6bn) extravaganza. The licence it controls was first acquired by TIW, a Canadian telecoms company that bid £4.4 billion (EU7bn) for the biggest of the five permits, despite having a market capitalisation of only C$3.5 billion (EU2.3bn) at the time. Little attention was paid to TIW in the run-up to the auction. It was not even considered a serious candidate, and was expected to lose out to companies with deeper pockets, such as Virgin and Global Crossing.

However, and in a Li masterstroke, Hutchison Whampoa took a 5% share of TIW shortly before the auction began. Although TIW executives were making the bids, few people were in any doubt about who was calling the shots. TIW was able to bid higher and higher because Li had supported a loan facility to the Canadian operator from Chase Manhattan and HSBC on the eve of the auction. Hutchison bought the TIW bidding vehicle after the auction ended.

The rules of the auction disqualified mystery players. One well-placed source at another of the bidders says that he scrutinised those rules the moment he learnt that Hutchison Whampoa was investing in TIW. The two companies “sailed extremely close to the wind”, he says, but the alliance kept within the UK government rules – just. It will never be known whether TIW’s rivals would have changed their pre-auction strategies had they realised what they were about to come up against. Li, the consummate wheeler-dealer, had done it again.

Still, Hutchison may be remembered not as Li’s crowning glory but as a high-profile flop. Being the first to launch 3G in Europe is a dangerous strategy. DoCoMo has been here before, launching the world’s first 3G service in Japan in 2001. Its service has been plagued with difficulties, slowing subscriber growth and damaging 3G’s reputation.

Even some of Hutchison’s suppliers admit that technical problems, such as difficulties in maintaining a connection when passing between a 2G and 3G network, are unlikely to be solved before mid-2003. But blending 2G and 3G networks is more than just an irritating technical problem. Hutchison, as a pure-play 3G operator, needs its competitors to carry its voice and data calls when subscribers travel out of range of the 3G network. (Hutchison’s networks in Italy and the UK cover less than 50% of the countries’ respective populations at present.) That means Hutchison must share precious call revenue with its rivals while it builds out its networks.

The carrier’s distribution channel has also drawn criticism. One of its key routes to market in the UK will be the recently acquired Superdrug pharmaceutical retailer. Mobile phones will share floor space with vitamins and medicines. But Deutsche Bank believes that the acquisition is a mistake because many of the outlets are not in prime locations and the chain is unlikely to draw in the high-spending business and consumer customers that Hutchison needs.

These concerns help to explain the murmurings of discontent among Hutchison’s backers in recent months. First, debt-laden KPN took a EU1.2 billion charge against its 15% stake in the venture and said it was putting the shares up for sale. No buyer has yet been found. Then DoCoMo rocked confidence in Hutchison further by writing down the value of its investment from Y190 billion to Y39 billion (EU1.6bn-EU320m).

What is more, not everything that Li has touched in the telecoms industry has turned to gold. Rabbit, his ill-fated foray into the cordless phone market, folded in 1994. And even his hugely successful follow-up, Orange, did not always have things its own way. The UK-based company’s international expansion suffered a series of setbacks early on.

But Li is famous for taking a long view and he remains undaunted by the early hiccups. In 2001, Hutchison Whampoa’s telecoms business contributed only 3% of its net profit, while the other core business – ports – contributed 27%. But bosses expect that to change. “Ports are a great business but we see big value creation in Hutchison 3G, which will overtake ports in the medium term,” said Frank Sixt, group finance director, earlier in 2002.

Hutchison, in fact, expects to have well over two million subscribers in Italy and the UK by the end of 2003. The company even doubled its original order of a million handsets from suppliers Motorola and NEC recently.

But such hubris should not be taken lightly. Hutchison 3G’s main backer, Hutchison Whampoa, is believed to have cash assets of more than EU20 billion. A strong balance sheet means that Hutchison will be able to aggressively buy market share if it wishes. As a new network operator it has no legacy systems, which would have to be upgraded and integrated at great cost before launching new services. Being a pure-play 3G operator means it can squeeze up to seven times as much voice traffic into its network as 2G operators, giving it the option of undercutting its rivals’ call tariffs. And it has acquired some of the most sought-after content in the embryonic wireless Internet market, including exclusive video clip rights to soccer matches.

The company also has the venerable Li Ka-shing name going for it. Can he make 3G in Europe a success? And, in so doing, reinvigorate the region’s IT and telecoms industries? It is a tall order. But if anyone can, he can. He is not called Chiu Yan for nothing.