The fibre with the hole in the middle 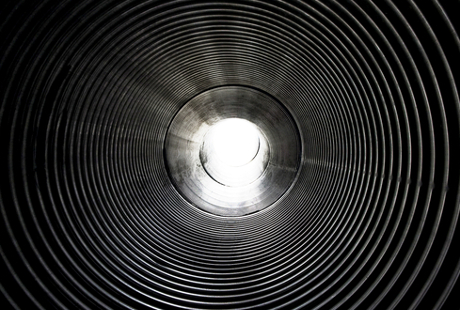 Fibre-optic cabling has without doubt hollow-core fibres can support multiple data maximum distance of 10 km before the revolutionised telecommunications, allowing far greater speeds of data transmission, over larger distances and with much less data loss than using copper wire.

But scientists at the University of Southampton recently demonstrated that they can make fibre-optic cables even more effective – by cutting a whole in the middle.
A conventional fibre is made from two types of glass. The light is carried by a central core of thin silica glass, which is surrounded by a thicker layer of glass cladding. The cladding has a high refractive index, so that light bounces back into the middle core if it comes off course. This guidance mechanism reduces data loss, but it also slows the signal down to around 70% of the speed of light.
One way to get around this is to use a ‘hollow-core’ fibre. Instead of a central core and an outer cladding, this fibre is made of an outer mesh of glass struts and an air-filled space in the middle, through which the photons are transmitted.
“The light is confined by reflection at the multiple air/glass interfaces within the fibre cladding,” explains Professor David Richardson, deputy director of the university’s Optoelectronics Research Centre. “This mechanism, referred to as bandgap guidance, allows the light to be guided in a core of air rather than glass.”
Richardson and his team did not invent hollow-core fibres but, in a recent paper for Nature Photonics, they demonstrated a technique that increases their data transmission capacity, therefore making them a more viable alternative.
Unlike their conventional counterparts, transmission ‘modes’. Each mode is a distinct pattern of light ‘vibration’ within the fibre. It was believed that this quality could be exploited to increase the data transmission of the fibres, using each mode as a separate channel, but it was also feared that the modes would interfere with one another, degrading data transfer.
“In our research, we managed to demonstrate that by controlling the injection of the data signals into the fibre, we could excite just a single mode, thereby readily allowing for high-fidelity data transmission.”

Using this technique, the researchers successfully demonstrated the first high- capacity, low-latency data transmission experiment performed using a hollow-core fibre. The signal travelled at 99.7% of
the speed of light, 31% faster than in conventional fibres. Data transmitted in this fibre would therefore arrive 1.54 microseconds earlier per kilometre than through a conventional fibre.
Having demonstrated transmission of a single signal, using just one mode, the researchers went on to transmit using three modes, tripling the capacity of the fibre. “We feared that the hollow core structures wouldn’t support more modes without degrading signal quality, but exploiting a few tricks borrowed from wireless communications this proved not to be the case,” Richardson says.
The problem with hollow-core fibres is loss of signal. As it stands, Richardson says it would be possible to transmit data over a signal is obliterated.
That is obviously no good for long-distance transmission, the current most common application of fibre-optic cables. But Richardson believes that the fidelity of hollow-core fibres will eventually not only match but exceed conventional fibres.
“We are optimistic that those loss limits can be reduced to values comparable with conventional fibre,” he says. “And if theory is believable, then we should be able to get them even lower than that, which would be significant.”
In conventional fibres, fluctuations in the glass density in the core cause light to scatter, meaning that data signal is lost. “By removing the glass, you remove this form of scattering,” he says.
That is some way off, though. “This is very forward-looking research, and I wouldn't present it as something that’s going to change long-haul communications tomorrow,” says Richardson.
In the meantime, hollow-core fibre may have more immediate applications in systems that require short but rapid transmission, such as supercomputers. Richardson says that Nokia Siemens successfully demonstrated hollow-core fibre data transmission rates of 73.7 terabits earlier this year – a thousand times faster that the current state-of-the-art 40-gigabit fibre-optic cables.
There are still a number of issues to be ironed out. For one thing, Richardson says, there has yet to be developed a technique for terminating the end of hollow-core fibres without letting moisture in. “It’s still very early in the research phase,” he says.