Skip to content
Home » Careers » Business Skills » The transformation of the CIO: from hero to villain, to hero once more

The transformation of the CIO: from hero to villain, to hero once more 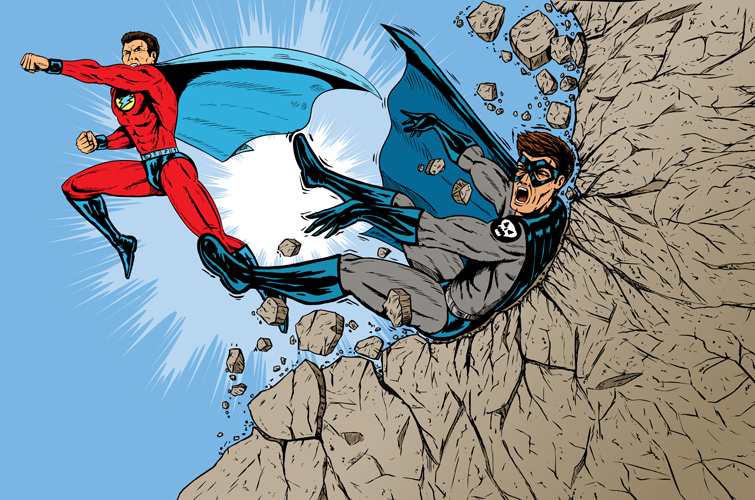 The role of a CIO has long been the de facto critical link between an organisation’s ambitions and its ICT-driven capability. The continual appointment of IT to the board has underlined organisations’ ongoing recognition of technology’s role in innovation – and when successful, has led to the newfound “hero” status of the CIO.

More recently however, this sheen has begun to deteriorate as consumerisation, shadow IT and data control have put IT at odds with the rest of the organisation. In their quest to guard intellectual property they have become the villains of the organisation.  But now, the tide is turning and this “villain” status is giving way to the hero badge once more.

The 1990s saw the rise of IT. The once humble and often small-sized IT operation moved out of the backroom and into the boardroom. Hot topics such as ‘Big IT’, Microsoft and firewalls became increasingly meaningful to the C-suite and, as a result, so did the CIO and their role within the organisation.

CIOs were at the forefront of revolutionary technological change. They held the enablement knowledge – the route from ambition to “how”. CIOs enabled organisations to make intelligent and invested choices in new technologies that partially defined mainstream business strategies.

>See also: The 4 new roles of the CIO

As well as advice on the latest innovations, CIOs could also ensure ICT met the needs of the business both now and in the future by keeping at the forefront of innovation. They could bring new levels of efficiency and cost savings, often through ERP systems and outsourcing contracts. All this, while also keeping the company secure with firewalls and data protection.

In short, CIOs provided organisations with a controlled and protected glimpse into the future – often delivering the future in the present – and as a result, were hailed as heroes.

The path to villain

But in the early 2000s, things began to change for the CIO. The business IT scene shifted pace and CIOs felt the full impact of the consumerisation of IT.

Advances in technology and increasing technological prowess of employees paired with the rise of social media platforms such as Facebook and LinkedIn all contributed to driving a growth in users’ expectations of – and frustrations with – enterprise technology.

Employees expected the same standard of technology in the workplace as they had at home. This opened up a new range of threats to the organisation. Employees’ familiarity with using search engines and downloading new tools and programmes meant that data – the modern CIO’s core resource and territory – was at risk or fragmented.

Internet security became not just a productivity and compliance threat, but also a brand threat. Suddenly, the CIO was essentially responsible for the company’s reputation.

The natural response was to lock the doors: secure the network from unwise downloads and web activity and restrict employees’ capabilities. From then on, employees battled against their CIOs when it came to shadow IT procedures and adhering to BYOD processes, as well as using social media and personal email accounts while at work.

The other side of the consumerisation coin was that this better appreciation and wider use of technology by consumers also meant that CMOs had to adapt their approach.

Successful marketing depended on a long list of tools and technical capabilities – CRM systems, databases, IP tracking, control over the website, not to mention the need to integrate multiple systems together.

CMOs therefore leant on CIOs for their support in order to meet their own targets. And yes, inevitably, the CIO would often become the CMO’s scapegoat in the boardroom.

If that wasn’t enough, CIOs were also faced with educating board members on the rise of cloud computing. After years of implementing static storage and servers, and positioning it as the most secure way to protect business critical data, the cloud created confusion.

Early-adopter CIOs battled to illustrate the positive impact and cost effectiveness of this technological advancement, whilst also appreciating and heading off the risks and fears of the rest of the board.

Meanwhile, more cautious later adopters – regardless of how sound their reservations – were accused of moving too slowly and missing opportunities.

The landscape was changing for the once hailed CIO as they transformed from the enabler to the enforcer – from hero to villain.

Resurrection of the hero

Today, the enablement opportunities for those currently filling one of the most dynamic roles in a modern organisation has returned.

Technological advances have created the possibility for a flexible working environment. No longer does an employee have to be at their desk, in front of their desktop, or even in the same geographical location to be able to perform their job.

Seamless, secure collaboration – regardless of whether the team is internal or external, and irrespective of device type or ownership – is now a priority for the modern organisation.

Businesses have seen the way in which unbridled employee IT adoption can cause frustration and impede progress, and want to remedy it.

Meanwhile, the CIO has matured. A new breed has appeared that has been “brought up” with cloud and is therefore fully aware of its capabilities – meaning their organisations are more likely to embrace, or already have embraced, cloud.

Collaboration and digital workplaces therefore represent a chance for CIOs to enable a refreshed working environment where productivity is high, costs are reduced, and complexity and siloes are removed – giving the business its best possible chance of success.

This is only possible because the ecosystem has changed. Former Microsoft CEO Steve Ballmer made it clear in front of the world that cloud is not merely an option – either for vendors or for business – by “betting the company on it”, and backed this up with the roll-out of Office 365.

>See also: Will the chief digital officer KO the CIO?

Of course, the old problems and concerns still exist – adoption rates, scale, control, security, integration, reliability, and of course ROI. But now vendors are more in tune with CIOs’ pressures and are able to provide them with the technology in the platform and also the documented evidence to quickly tackle these objections – both in the boardroom and in practice – putting CIOs back on the path to being a reliable enabler.

After a dark period having to play the enforcer role, the CIO is now once again an innovator, and seen as critical to business success.

The arrival of the cloud and its rapid solidifying within businesses – helped in no small part by the identifiable benefits it brought – has opened up the CIO’s possibilities.

Its controllable flexibility, and the collaborative capabilities it brings with it, means that it is the platform through which both employees and IT can have what they want.

For many years, while the CIO plummeted from hero to villain, pleasing both sides of the equation was as distant a dream as Nirvana, and equally hard to believe in. This is no longer the case.