US Government websites hacked with IS message 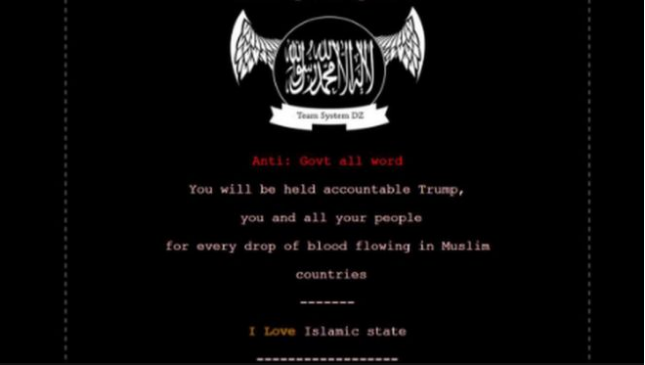 Following the sustained cyber attack on UK Parliament this weekend, it has been reported that US Government websites – many in Ohio – were hacked yesterday with a message that supposedly supports Islamic State – the terror group.

Ohio Governer, John Kasich’s website was also hacked and a pro-IS message was displayed. The Ohio governor’s website was resultantly down for for some time on Sunday, before it came back online. The message read that President Trump would be held accountable for “every drop of blood flowing in Muslim countries”. It ended with “I love Islamic state”.

A spokeswoman for Kasich, Emmalee Kalmbach, said in a statement: “As soon as we were notified of the situation, we immediately began to correct it, and will continue to monitor until fully resolved.”

The hacking group behind the attack is called Team System DZ. The group has carried out hacking attempts in the past, mostly carrying anti-Israel messages.

Commenting on this, Itsik Mantin, director of security research at Imperva, said “Website defacement attacks are probably the most common and easy-to-mount class of web attacks.”

“The group Team System DZ that is claimed to be behind this attack has history of defacement attacks for political purposes and, from previous analysis of incidents attributed to them, it seems that their way of work is mostly opportunistic, using basic hacking tools like brute force on admin passwords on large number of sites of interest, and once finding sites that are unprotected, take over these sites and plant the group’s message in the site.”

The Ohio Office of Health Transformation and the Ohio Department of Medicaid websites were also affected, but later came back online.

However, the websites of ‘Ohio’s First Lady’ Karen Kasich, the Ohio Department of Rehabilitation and Corrections and the Ohio Inspector General were still down for maintenance at midnight (04:00 GMT on Monday).

Mantin, concluded that “Without referring specifically to this incident, and regardless of the actual method that was used in this attack, the sad fact is that even today, after at least 20 years of research of web attacks and mitigations, and with numerous web attack protection solutions available in the market, still significant portion of web applications are vulnerable to some of the oldest trick in the web attack book, like password brute force.”